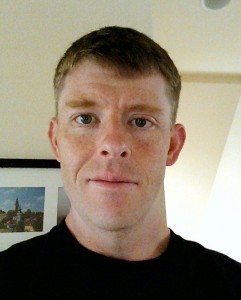 About Justin Edison:
I’m a regular guy who, at 40, still bumbles and stumbles his way through a lot of things: parenting, soccer, coaching soccer, cooking, definitely writing. I’ve made mistakes galore, but like to think I’ve learned from them. I was never out to pursue perfection, I guess. But as long as my novels are engrossing and people enjoy reading them, then I’ve done my job well.

What inspires you to write?
Honestly, I’m inspired by all kinds of things: music, art, goofy thoughts that hit when I’m driving on a sunny day or out for an occasional walk. The idea for my Wyoming-set book (planned to be #5) hit when I was mowing the yard – completely unrelated thoughts, but the book has blossomed.
With this book, the idea for the sports-kidnapping story came from a brainstorm. In my first, “Watching the World Fall,” the hero was an antihero – the one doing the kidnapping, albeit for understandable (however criminal) reasons. With “The Churning,” I thought it would be fun to turn the tables on a real egomaniac. Hero Arman Hessabi is a talented prince among men – one who has maybe lost sight of what it means to be human and to be valued for something other than his playing abilities. And I love to put characters in desperate situations, so this story worked perfectly.

Tell us about your writing process.
I’m definitely an outliner, after too many miserable failures as a seat-of-the-pants writer (although that tends to work best for my scenes). I don’t use anything fancy, just a spiral and notes on scraps. The big chunks fall into place right away, and then a lot of stuff germinates and fleshes itself out over the next few weeks. I’m finishing a draft for a war novel called “Endgame” now, and the first two-thirds of that story sprang up all at once. I’m very, very lucky to be having so much fun with it all.
For characters, it can be tricky. I kind of think in terms of cinema–who or what do I imagine in a particular scene. What do I imagine them doing as they’re interacting?

For Fiction Writers: Do you listen (or talk to) to your characters?
Talking, lots of back-and-forth. Voices help, too. For the character of Fat Man in “The Churning,” I’ve been reading his lines with actor Jason Statham’s voice. (I hope Mr. Statham would be tickled by this, since Fat Man is such a bizarre, deplorable person.) The character of Huck is always tired, except the one scene where he’s ticked off. For character work, I definitely recommend a dictation device. Try out lines, see how they feel when you hear them.

What advice would you give other writers?
The express version of my writing journey would go: started early (maybe age 10) writing sci-fi and robot wars stuff; moved onto fantasy; read and grew; started writing stories (in college) people actually cared about reading; read and grew; writing crisis in grad school soon trumped by a utopian thesis idea (failed, into the shoebox); trumped by love story for the thesis (MFA done, woo-hoo!); trumped by first novel; read and grew; fully addicted to writing, now. So, twenty years of mistakes later, I’m getting somewhere!

How did you decide how to publish your books?
I self-pubbed “Watching the World Fall” after ‘getting impatient’ with the agent search. Honestly, I’d been working on the thing for almost 11 years. I was ready to have it off my plate. But with the agent-query route, it is a bit like tossing a wadded-up love note across the gym floor at the super-crowded dance, disco ball going. Who’s even going to notice it? I went with Amazon and don’t regret it. I did the same with “The Churning” too, almost right away. About a year ago, Booktrope told me they want to publish this one, which is awesome. I’m very lucky!

What do you think about the future of book publishing?
I’m not sure what to think. The publishing-house system we have now is really tough to “break into” for this reason or that. But I don’t read books because they got Knopf’s stamp of approval; I read them because they sound good. Then, when you think about J.K. Rowling’s success (How many dozens of people turned down Harry Potter?) or Andy Weir’s “The Martian” (self-pubbed book to roaring hit in 3 years), it seems like a changing-of-the-guard could be a good thing.

What genres do you write?: Literary, thriller, psychological thriller, sports.