You are here: Home / Interviews With Authors / Interview with Author – Joe Harwell @HarwellJoe 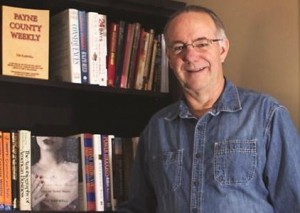 Author Bio:
Joe Harwell’s family is from Mansfield and Huntington, AR. Although he grew up in eastern Oklahoma and now lives in Tulsa, he still considers himself an Arkie. After a career including retail management, coal mining, telecom sales, newspaper publisher, TV station owner and metal buying, Joe began writing and self-publishing novels set in Arkansas and Oklahoma in 2009. Four of his novels are historical fiction in a range of genres including viking vampires, the media, political corruption and the paranormal, plus one futuristic thriller about a Chinese super drug. Two more novels will be released in 2014 featuring serial killers and angels, demons and vampires. Long range projects include a novel about abuses of the mental health system, murder for hire, a zombie outbreak story set in western Arkansas and a movie script based on a 1976 concert in eastern Oklahoma celebrating America’s bicentennial.

What inspires you to write?
My original inspiration to write novels began in 2009 after the death of my wife and high school sweetheart, Becky. We spent 36 years together from first date until her passing. I had the idea for my first novel in 2005 and carried it around in my head for three years until I wrote, The Indian Rock Vampire about a beautiful, immortal female who is the same age as Becky was when we met. Since then I have continued to write, mostly historical fiction novels and one futuristic thriller, which are all set in Oklahoma and Arkansas.

Tell us about your writing process.
I usually start with some spark of an idea, then begin to write character background. This helps me form and visualize the characters and get to know them at the deepest level. I write a loose outline and write what is usually the first chapter or two, although the first chapters written aren’t always the opening chapters of the book. I’ve self-published at least one novel a year since 2009, with plans to continue continue on this schedule.

For Fiction Writers: Do you listen (or talk to) to your characters?
I tell people I listen to the voices (characters) in my head and take notes. Once I start a novel, the characters guide me where they want to go. I have to manage them some to get them where I need them to be in order to make the story end like I want it to conclude.

What advice would you give other writers?
I always tell other writers to just write. don’t worry about how it looks in the first few drafts, because it’s never as good as it will be when you’ve read it to writers groups and rewritten some of it until the story moves like you want.

How did you decide how to publish your books?
I contacted several agents and publishers when my first novel was finished, but no one was interested in an unknown writer in 2009. I have several years of experience in media as the owner of a newspaper and TV station, plus decades of other sales experience. I decided there was nothing a publisher could do that I couldn’t do for myself, so I researched print on demand companies and chose Create Space, who I highly recommend.

What genres do you write?
Historical fiction and futuristic thriller