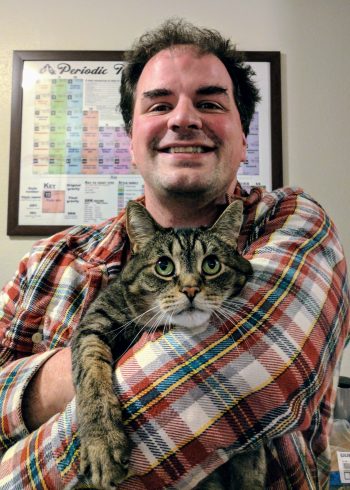 About Daniel Potter:
DANIEL POTTER writes about creatures that are generally considered highly improbable, from talking cats, flying reptiles made of living metal and people who sprout foot long talons when annoyed. As a biologist he should know better but he’s always ready to leave reality outside if needs too, no matter how much it scratches at the door. He’s the author of two series, Freelance Familiars, a unique and proper take on urban fantasy from the familiar’s perspective and Rise of the Horned Serpent which is best described as Sky Pirates Versus Dragons.

What inspires you to write?
I don't have a choice. I have to create or my head will explode from the pressure. Otherwise my mental health takes a hit and I wind up acting out scenes very loudly in the shower. Writing is the easiest method for me to vent my imagination out into the world.

What authors do you read when you aren’t writing?
For indies you can't do better than J. Zachary Pike. But I don't read much fiction when I'm writing. I'll binge a series or two between books. While I'm writing I listen to non fiction history podcasts. Recently I'm digging Behind the Bastards by Robert Evans

Tell us about your writing process.
I write on my current project from 7:30 to 11:30 AM with the goal of getting at least two thousand words. Generally I have a very very general outline which I totally ignore until I manage to wedge the characters into some plot corner and get mired in the mushy middle. Then I'll take a few days to walk around my house muttering to myself and hash out an outline to the end of the book. Usually I can finish the book then. Sometime this will be the start of a total rewrite. Process will repeat until I've actually written the end some how.

For Fiction Writers: Do you listen (or talk to) to your characters?
Not directly, but I tend to do voices for them as I write their dialog. Sometime my spouse asks me to close my office door because they're sick of listening to me muttering in squirrel.

What advice would you give other writers?
Ya gotta write and writing has to be a habit. Clear out some portion of your day for writing and guard it against distractions. Unhook the internet, put your phone in a different room. Just write.

How did you decide how to publish your books?
The thought of trying to get a big five publishing contract makes me laugh. Can you imagine the pitch? Our Main Character is turned into a mountain lion and must fend off the wizards and werewolves who want to sell him into a forced marriage with an apprentice? Oh and in future books he squares off against a corrupt magical society as he fights for equal rights for all similarly transformed individuals. Oh and its a book for adults as these animal characters occasionally swear and acknowledge the existence of sex. Any editor would have me rewrite it as a boring middle grade story.

Self publishing was the only way to go. And you know what? It worked! Lots of readers love these books.

What do you think about the future of book publishing?
It's going to continue to get tougher and tougher to get noticed on amazon. You need to find other routes to readers.

What genres do you write?: fantasy, urban fantasy, humorous fantasy