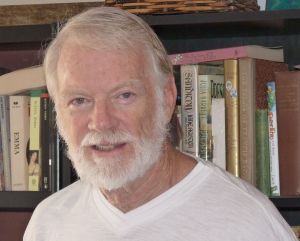 About Dan Pollock:
Dan Pollock was born in New York City to a family of writers and grew up in Laguna Beach, California. A former syndicate editor with the Los Angeles Times, Pollock is the author of sevenr thriller novels–Lair of the Fox, Duel of Assassins, Orinoco (originally published as Pursuit Into Darkness), The Running Boy, Countdown to Casablanca, Ringland and a specially commissioned “logistics” thriller, Precipice.

The Pollocks live in Southern California with their two children.

What inspires you to write?
I write action-adventure and foreign intrigue thrillers–the kind of books that I like to read. My first published thriller was set in exotic locales that, at that time, I’d never laid eyes on–Istanbul and the Eastern Mediterranean. Yet Lair of the Fox went on to earn accolades from the likes of Clive Cussler and the late Ross Thomas, and critical praise from the New York Times, the L.A. Times, and Publishers Weekly. Even better, everyday readers agreed–and I’ve never looked back.

Tell us about your writing process.
I begin with a central idea and let my subconscious churn up related ideas that seem connected, I fill up dozens of 3×5 card with these fragments, the way many screenwriters do, and then assemble these in a sequence, which I then expand into a narrative. Eventually I work up a detailed outline, with likely chapter indications. While this is going forward, I am reading and researching voraciously. When all this becomes unbearable, I finally start page one. Four or five pages a day are all I have ever been able to average. With extensive rewrites and revisions, this usually produces a full-length thriller in a year.

For Fiction Writers: Do you listen (or talk to) to your characters?
I am always listening to my characters, trying to channel their voices. For some scenes, I get off my chair and try to summon the character as an actor would and act out the scenes. Usually, however, I just hear the voice.

What advice would you give other writers?
I advice would-be writers to write every day, striving for quantity over quality at first. This is how facility with the tools of the trade is acquired. Study the writers you admire most, and of course read voraciously and ominiverously. I don’t believe that you have write what you know. I am not a man of action, but I write about them; I do work to make the action and the background authentic, however. It’s never easy, but it is always fun.

How did you decide how to publish your books?
After many years of being rejected, I finally got a novel accepted by a small publisher. Good reviews got me a paperback reprint sales, and even better reviews got me a two-book deal with Simon & Schuster/Pocket Books. But I did not become a best-selling writer, and with a growing family I was forced to take a day job again and put my writing on the back burner. Years later, I find self-publishing a very satisfying alternative to running the gauntlet of New York publishers, who are looking for brand-name writers.

What do you think about the future of book publishing?
I can only say that good storytelling will always find an audience, whether delivered on printed paper or pixels on a screen, just as it has since the first bard told his tales around the campfire.

What genres do you write?: thrillers, action-adventure, suspense