You are here: Home / Fiction / Mystery/Suspense / In the Matter of Michael Vogel by Drew Yanno 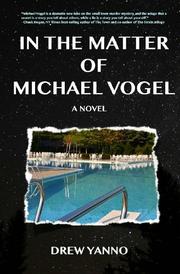 It’s the late summer of 1966 in a small town in upstate New York when the body of eight year old Michael Vogel is found at the bottom of the deep end of the municipal swimming pool four hours after closing.

At first, the townspeople accept the initial reports of an accidental drowning, despite the fact that the boy’s body wasn’t discovered when the life guards searched the pool earlier in the day after his sister reported him missing. However, when an autopsy reveals an unexpected result, it sets in motion a search for a killer in a town unaccustomed to murder.

The story is told from the perspective of three members of the community: one is a twelve year old boy with a future he wants to avoid; the second is a sheriff with a past he wants to forget; and the third is a forty year old bachelor with secrets he wants desperately to keep.

Their stories all come together in a startling and thrilling conclusion that helps provide a measure of redemption for each of them.

How is Writing In Your Genre Different from Others?
Well, in a mystery you certainly need to keep the reader guessing, along with placing some surprises along the way. There is a fine line between keeping the reader informed and not giving away the farm.

What Advice Would You Give Aspiring Writers?
I’m hesitant to give unsolicited advice, but I guess this qualifies as solicited. My biggest bit of advice to writers is to read. Sounds simple, I know, but I actually know some folks who claim to want to write novels, for instance, and yet they don’t read novels. That’s kind of insane to me. I think writers should read everything, but in particular, they should read what they hope to write. For example, if you want to write romance, read romance novels. If you want to write Young Adult, you better read a lot of Young Adult.

I’d also tell them to stick with it if it’s what they really want to do. Nobody succeeds on their first try or with their first draft. If it’s what you want to do, continue to write until you get there. You will get better and success, in some form or another, will come.

Author Bio:
Drew Yanno was born and raised in upstate New York and received both his undergraduate and law degrees at Syracuse University.

After serving a clerkship in Albany, New York, Drew joined a large law firm in Boston where he worked for several years before founding his own firm. Throughout his time as a lawyer, Drew also taught law in the Carroll School of Management at Boston College.

In 1993, Drew began writing screenplays. Two years later, his screenplay No Safe Haven was purchased by Universal Studios after an eight hour bidding war. Following that, Drew went on to write a number of screenplays, both on spec and for hire.

In 2000, Drew founded the screenwriting program in the Film Department at Boston College where he taught for eleven years.

In 2006, his book The Third Act: Writing a Great Ending to Your Screenplay was published by Continuum International Publishing Group. In 2012, his second book Idea to Story to Screenplay: a Workbook for Writing the First Draft of Your Screenplay was released as a Kindle e-book.

In addition to writing, Drew has worked as a script consultant for a number of writers, producers and directors, including Will Smith and Overbrook Entertainment.

In the Matter of Michael Vogel is his first novel.