You are here: Home / Bargains and Freebies / Bargain Books Under $3 / In The Beginning, There Was a Murder by P.C. James 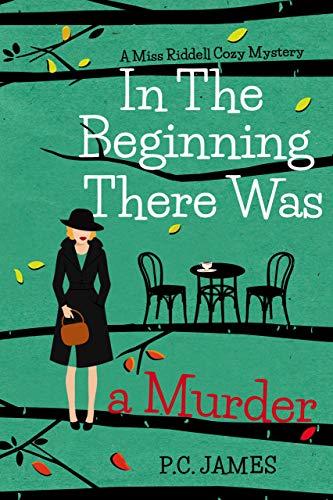 In The Beginning, There Was a Murder by P.C. James

A secret liaison. A violent murder. Can one woman solve the crime without joining the body count?
Northern England, 1953. Pauline Riddell has grand ambitions for her future at the armament factory. So, when her closest workmate reveals a salacious affair with a married man, Pauline refuses to risk her career by listening to the scandal. But she’s shaken to her core when the police arrive with news of her best friend’s homicide.
Desperate for justice, Pauline’s insistent poking into the investigation only makes her the prime suspect. And now to clear her name, she must unravel a web of deadly clues entangling her in a sinister plot.
Can Pauline catch the killer before they strike again?

What Inspired You to Write Your Book?
I've always loved cozy mysteries, especially Agatha Christie's Miss Marple who reminds me so much of my aunts when I was growing up. Christie gives few indications in the books how Miss Marple became such a super-sleuth so I decided I would create my own elderly lady super-sleuth and I would show how she became to be. I started with In The Beginning, There Was a Murder.

How Did You Come up With Your Characters?
Miss Riddell is an homage to my elderly aunts, who would recognize themselves in the character of Miss Riddell, I hope. The cynical Inspector Ramsay is very much the author, me. The other characters, including the setting, are very much the place and people I knew growing up there.

Book Sample
“I hope we’ve had all the murders for this year, Miss Riddell. We’re past our annual average already. But, to answer your point, I’m afraid that is what happens. Most crimes are solved within days of being committed if we put all our people on them immediately. With the passing of time, it’s harder to solve the puzzles and they lie quiet, unless some new evidence comes to light. Have you found some new evidence?”

The silence from Pauline’s end of the phone spoke of considerable emotional conflict on her part. She had something to say, he was sure of that, but wasn’t sure whether to give it.

“Miss Riddell, please. Something is bothering you. Maybe you think it is so unimportant I’ll dismiss it. I assure you I won’t. I have not forgotten your friend’s death.”

When she’d recounted what she’d seen the previous evening, Ramsay said loudly enough to be heard by any listener, “I thought you weren’t going to do anything to put yourself in danger, Miss Riddell.”

“I was never in danger and I was just finishing off what I started before,” she said.

“Then please leave it there,” Ramsay said. “The moment I have men available, I will follow up. What you say is reasonable, the names, the description of the car, and now a nearby place for him to take your friend. This is enough for me to begin some serious digging. You, however, must leave it. I don’t want our annual violent deaths statistics to include another young woman just starting out in life.”

When she’d gone, Ramsay called in his sergeant and told him what he’d learned.

“I agree, sir,” Morrison said, after he’d heard Ramsay out. “It needs following up. Still, I don’t see it. Yes, an adulterer might murder his mistress to avoid a scandal, I’m sure it happens, just not very often.”

“But think about it, Sergeant,” Ramsay said. “This man has a lot more pressure on him than your average adulterer. He was brought here for technical reasons from a defeated regime. Who knows what secrets actually lie in his past? As well, because of his technical knowledge, he has an important position that could be lost if his personal behavior repulsed people. This is Britain where adultery is frowned upon, not France where it is accepted.”

“That’s true,” Morrison said, nodding. “This may well be one of those ‘not very often’ cases I was talking about. He certainly has a lot to lose position, wealth, family, maybe even his place here. He might even be sent back to East Germany if he loses his job. Maybe he would think murder worth the risk?”

“Exactly. I think we finally have a suspect with a strong motive, as well as means and opportunity.”
“Certainly, one with more reason than Miss Riddell,” Morrison said.

“Nothing has come up there?”

“If she had a motive it’s something incomprehensible to the police mind,” Morrison said. “One of the ‘they wore the same dresses at a party’ or something equally petty to anyone but the perpetrator. Quite honestly, I don’t see that in Miss Riddell.”

“Nor do I,” Ramsay agreed, ‘but I don’t think we can just dismiss her from the suspect list. She may not have reasons we can see but she had the means and maybe opportunity.”

Links to Purchase Print Book version – Click links for book samples, reviews and to purchase
Buy In The Beginning, There Was a Murder Print Edition at Amazon