You are here: Home / Autobiographies, Biographies & Memoirs / Impossible Beyond This Point by Joel Horn 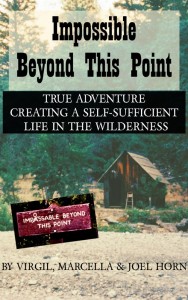 What inspired you to write your memoir?
My parents wrote the first books after years of people asking “why did you move there?” and “how did you do It?”
I put the two books together and filled in my vision of how it was growing up.

About your Book:
This editorial review from the local paper did a great synopsis.

The 371-page narrative combines writings by the late Virgil Horn, his wife, Marcella, and their youngest son, Joel, chronicling the true family story of life forged on a remote mining claim up the North Fork of the Trinity River in the 1960s.

The book’s title comes from an early jest by Virgil Horn suggesting that a U.S. Forest Service sign was misspelled at the start of a faint trail down to the river warning that the route was “impassable beyond this point.”

Nearing 40, the poet, sculptor, jewelry artist, teacher and World War II veteran and his wife, Marcella, an organic vegetable farmer, packed their three young sons, the dogs, the chickens, geese, tomato seedlings, tools, food, bedding and other essentials into the old family station wagon and fabricated trailer for the 600-mile trek to begin life in the wilderness of Trinity County.

It was the early 1960s and the Southern California couple from Sylmar was in search of a place where they could live an independent life free of fear and from neighbors who’d report them to the city health department for keeping chickens. They learned of a mining claim for sale in Trinity County and the adventure began before they even cleared the Tehachapi Mountains out of Los Angeles.

Ignoring their well-meaning but pessimistic friends and acquaintances who predicted only doom and failure, they landed in a place where the only neighbor for many miles in any direction was an old hermit who’d lived on the river alone for 40 years prior to their arrival and freely shared his own dire warnings and predictions. They soon found themselves to be something of a curiosity to local townspeople in Junction City and Weaverville who mistook them for “hippies” and would make the drive up Hobo Gulch to check them out.

Many old-time Trinity County characters fill the pages, as do vivid descriptions of the rugged canyons and scenic wilderness that could hide danger without warning from a day out picking blackberries above the river to a night with rattlesnakes under the floor boards of the one-room shack the family slept in.

Told with humor and an old-time flair, the Horn family story is one of grit and ingenuity as it describes their struggles and successes in creating a home on the North Fork far above the old mining town of Helena west of Junction City. Just getting there involved a harrowing drive up the Hobo Gulch Road and then a daily toil up and down a rugged two-mile trail from where the road peters out to the river flat they called home.

The book spans a 20-year period beginning with the family’s first days and then years at the flat when winters were spent at a rented cabin in Denny where Virgil got a job teaching at the school which the boys attended. As improvements were made, the family was able to reside on the river flat year-round and the boys were homeschooled.

Several years were spent in fear that the mining claim would be rescinded by the U.S. Forest Service with inhabitants and all improvements ordered removed. Theirs was one that garnered a patent due to successful mineral testing and now belongs to the Horn family and heirs in perpetuity…
-Sally Morris The Trinity Journal

How did you decide how to publish your book and where is it published through:
When Create Space was launched it could not be beat as a publishing option.

How do you see writing a Memoir as different from writing other genres of books?
You just rely on memory and have to keep in mind libel when writing about true characters.

Author Bio:
Barely five years old when his family moved from southern California to the wilderness, Joel Horn and his two brothers grew up in the rugged Trinity Alps, learning how to do the numerous and varied tasks necessary for survival while carving out a life in the remote paradise they dubbed the Flat. Living this self-reliant life and tutored by the best of teachers, their dad and hands-on experience, they achieved a level of self-sufficiency rarely seen in modern times.

Joel is a veteran with three deployments during his 20 years as a UH-1 and UH-60 crew chief in the California National Guard. Like his father, Joel is also an artist and jeweler and works from home in the family businesses, Horn’s Jewelry and Rock Climbing Jewelry. Joel continues to live on the Flat today, with his wife of nearly two decades and his brothers close by.

In his first book, Impossible Beyond This Point, Joel combines his parents’ writings with his own recollections to create a fascinating and entertaining account of the family’s struggle and triumph creating a self-sufficient life in the wilderness.