You are here: Home / Fiction / Action & Adventure / Heroes and Hounds by Bill Miller 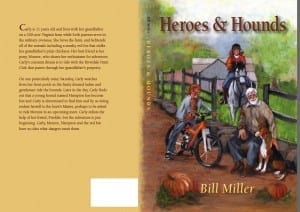 While Carly’s parents are finishing out their military tours, she stays with her grandfather on his farm. She loves watching the Riverdale Hunt Club in the fall and yearns to join them. Her own pony, Monroe, used to run with them before he became hers, but she is only eleven. So she dreams of riding Monroe chasing the fox.

Hampton is a new addition to the kennels and because one of the other hounds is injured, he gets to join in. He’s really excited but he’s never ran so much and he is tired. When he gets a drink at the stream, the Hunt leaves him and Hampton is lost. He is hungry, tired and just wants to go home. When he smells something yummy on the air, he follows his nose and winds up at the home of Strange Willie.

Willie is a vet who lives very basically and doesn’t ask for much. Most of the children in the area are scared to death of him. At first Willie tries to shoot Hampton, but thankfully a fox leaps in the way and saves Hampton. Later, Hampton saves the fox from one of Willie’s booby traps. An unorthodox friendship, but it works. When Willie’s house catches afire, even though he had tried to shoot Hampton, he enters the abode and wakens Willie, saving his life.

Carly is determined to find the lost hound, but when she is out looking, a rabid skunk approaches her. Thankfully, Willie saves her life. He isn’t as scary as everyone says and she sees he has Hampton. But the Master of the Hunt is looking for Hampton and Carly isn’t sure what the right thing to do would be. But when one of her friends disappears, Carly knows she has to speak up.

Heroes and Hounds is a middle-grade novel with appealing characters and several great messages. Bringing the fox and the hound to life in a new twist from the Disney version is delightful and thoroughly entertaining. Miller does a great job of keeping the reader involved in the story with many adventures. If you like animals and a clean read, pick this one up! You’re sure to enjoy it!

Author Bio:
Bill Miller has been riding to the hounds for the over 40 years. For nearly 20 years he has been an honorary whipper-in for the Norfolk Hunt Club. Bill is also actively involved in Team Penning during the summer months. He lives on a small farm in Sherborn, Massachusetts with his wife, three horses and dog. When not working with horses, Bill is an independent film director and cinematogrpaher. His TV shows and commercials have been viewed by millions worldwide and he has won three Emmys and numerous other industry awards. He has also been widely published in trade magazines. Bill is also creative director for Spirit of the American Cowboy Foundation, a non-profit organization which raises money for pediatric cancer research.  http://www.billmillerfilm.com/

What Inspired You to Write Your Book?
I have been an avid equestrian all of my adult life and have been actively involved in Foxhunting for most of that time. We are a drag hunt which means we don’t actually chase live animals and there is never a kill. A number of years ago, the Master of the Hunt, an elderly lady, told me the brief story about a hound that went missing for three months and was found safe and sound several states away. This was the inspiration for Heroes and Hounds and as an 80th birthday present for my dear friend, I wrote the story. It was delivered as a manuscript in a three-ring binder. I shopped the story around for a little while but I was disappointed at the results so I filed it away. (Rejection letters) A few years later, I met another author who was writing novels about foxhunting in Mississippi. We talked and she told me about self-publishing which by now had reached respectable levels. I sent her the manuscript, she read it and loved it, and encouraged me to publish. Next I looked for an illustrator which I felt would great enhance the project. I met a retired couple from upstate New York. She an illustrator, he a book designer. I had gotten all kinds of ridiculous quotes from others around the country but Mary and Al read the story, loved it, and wanted to be part of the project. And they didn’t want any upfront money. It took another year to bring the illustrations to life, to really rewrite and edit the manuscript and publish the book. But it was a labor of love from everyone involved and the results have been more than we ever imagined. The story itself, while based on a true incident, really took on a life of its own and is basically fiction.