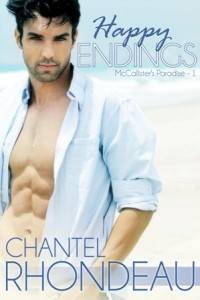 Handsome, wealthy Quinn McCallister is the most eligible bachelor on McCallister’s Paradise. Making his family’s island resort a success is all that matters to this workaholic. Everything changes when he meets the beautiful new massage therapist…

Larissa Benner may have survived cancer, but its aftermath left plenty of problems besides the ever-looming fear of relapse. Her family nearly went bankrupt paying for her life-saving treatments. She desperately needs the full-time therapist position on the island and the benefits that come with it. The last thing she wants is problems with her boss, or a complicated office romance.

It’s hard for her to resist Quinn’s charms—or his passionate side. However, Quinn is married to his job. The choice between love and work is tough for him to juggle and has Larissa scared. If the cancer recurs, could she count on him to be there for her? Or would he leave her to face it alone, ending her relationship in tragedy?

What Inspired You to Write Your Book?
Even though I love the resort this book is set on and the big loving, McCallister family, it was actually Larissa (the love interest) who I was most interested in, wanting to tell her story and her fight with breast cancer.

I have rheumatoid arthritis, and autoimmune disease. The medicine I take to help me function also makes my hair fall out. I was searching on-line for ways to help this and I ran across a breast cancer survivor message board. The women there were so courageous and supportive of one another, and it made me realize that there were worse problems than losing your hair, and thoughts of Larissa Benner and this island were born.

How Did You Come up With Your Characters?
I’m a seat of my pants writer. Larrisa was created as above, by reading message boards on breast cancer survivors. Quinn was different. I wasn’t altogether certain exactly who he was when I first began the book, except to know he was a workaholic. My characters tend to grow and change organically as I write my books based on what is happening to them.

Book Sample
The luxurious town car pulled up the dirt path onto a paved drive in front of a surprisingly cozy house. Larissa had expected something much larger. A wraparound porch boasted lawn furniture and a swing, and Larissa wondered if the McCallister’s spent time watching the sun fall over the ocean, together.

In any event, her original impression of them being laid back for rich people was correct. This house was just big enough to hold a family with five children in comfort, nothing more. It certainly wasn’t the mansion she’d envisioned.

The driver hopped out of the front and opened her door. “Here we are, Miss Benner. Enjoy your night.”

Before she knew what happened, the driver helped her out of the seat, jumped back in, and took off down the road. Maybe that was the McCallister’s way of making sure she didn’t chicken out and leave. She was stranded.

The front door opened and Quinn stepped onto the porch. “Larissa.”

The way he said it still gave her shivers.

He paced slowly toward her, his powerful leg muscles defined beneath his slacks when he ran lightly down the stairs. He wore a polo shirt tonight in a grey color that accentuated his eyes.

Those eyes. They caught and held her as he approached.

He took her hand in his, bending over it as he raised it to his mouth. A tingle of awareness shot up her arm, even though he did the polite thing, not really touching his lips to her skin. Still, she could feel his breath upon it, and goose bumps pricked her flesh.

“You look lovely,” he said, releasing her hand as he straightened up. “Did Dad lure you here with promises of Mom’s famous chocolate cake?”

“Famous, huh? He had a peculiar smile when he told me about it, but I didn’t know it was famous. Now I’m anxious to try it.”

He offered her his arm, and Larissa hesitated before accepting it.

“Is your entire family here?”

He shook his head. “Just us. Mom and Dad say I need a night off work.”

Larissa looked out across the water to avoid looking at Quinn. John had suggested it would be a small dinner party, but she hadn’t realized just how small. What she desperately wanted to know was whether this was Quinn’s idea. Was this another date she was being tricked into?

“Look, Larissa, about the party last weekend.” Quinn shifted his feet back and forth. “I shouldn’t have left without saying goodbye. I also shouldn’t have told you to go with Parker, when what I really wanted was to be alone with you. I don’t like the party scene and dancing real well, and I thought you wanted Parker, so…”

“Is this your way of apologizing for ditching me before the fireworks?” Larissa glanced back at him.

The breeze caught his hair, mussing the black strands in a wild way that made him even more handsome. Larissa sighed internally. She was attracted to him, no matter what she tried to tell herself. Maybe brooding and grumpy did it for her. It wasn’t as though she’d had many serious relationships to know what she was looking for in a mate.

Besides, the last time she gave her heart to a man, he couldn’t handle things when she got sick. Jacob tried to control things and had a hard time with the fact that her illness was outside of his control. Larissa knew marrying him would be a mistake and had to break things off.

It was hard to believe anyone out there would be able to handle her being sick if the cancer returned, but apparently her heart was hoping Quinn was that sort of man, no matter how sternly her brain told it not to like him.

Quinn took both her hands, squeezing them gently. “Yes. This is an apology. I am very sorry. I haven’t been the nicest guy to be around. Mom’s worked hard on dinner, and I’d like tonight to go well. Can we get along?”

Larissa nodded, barely daring to breathe because the scent of Quinn’s faint cologne was setting her nerves on overdrive. How could the man infuriate and attract her all at the same time?