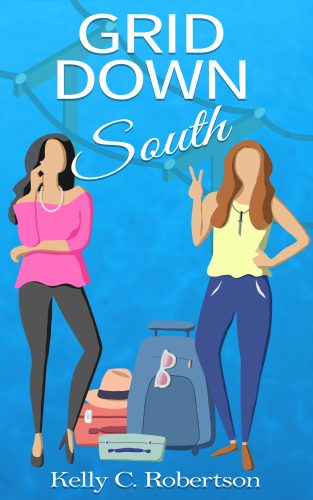 A light-hearted tribute to the power of girlfriends and the bonds women forge through trauma, drama and humor.

Liv and Susie have been best friends for 30 years. Over forty and over-scheduled, they make a break for an overdue beach vacation. They’re feeling closer and more relaxed than they have since eighth grade. But with strange power outages and wild rumors flying faster than the grounded airplanes, their holiday is turned into more adventure than they’d bargained for.

Defiant Susie is not having it. She promised herself three relaxing days to catch up on the sleep she’s missed in the last thirteen years of parenting. Pragmatic Liv urges Susie to consider getting back home, where things are more controllable, even if it means sacrificing grown-up drinks and uninterrupted naps. After the power in the whole city goes out, they try to make the best of a sticky situation by holing up their evacuated hotel. Susie and Liv take full advantage of all five stars before the southern humidity forces them out of the luxurious resort and into trouble.

Their careful plans for a safe trip home are wrecked before they even leave the parking garage. They maneuver around the good guys, the bad guys, and the guys who are playing on both sides. This wild ride of a vacation breaks down their patience with the world and strengthens the bond, and snark, between them.

What Inspired You to Write Your Book?
My best friend, Angela, had a dream that inspired this storyline. She and I started this book together as a delicious distraction from our busy schedules and for dedicated time together. Four months into the project, she died unexpectedly. I picked the project up again over a year later, as a grieving tool and a reminder of the magic of life amid such devastating loss. Angela was one of the founding board members of the first women's sober living facility in Mississippi. The proceeds of the sales are contributed to the facility in her memory.

How Did You Come up With Your Characters?
The four main characters are based loosely on the women in Angela's inner circle. The character of Susie is absolutely based on Angela's outrageous personality. The supporting characters were pulled from a combination of popular characteristics in the region and pure imagination. It was important to balance the severity of the situation with humor and to represent the people of the south accurately.