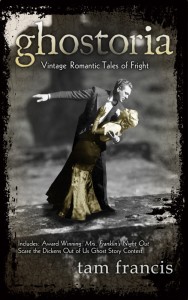 Do you like scary stories with a little romance and a vintage twist? Welcome to Ghostoria.

What happens when a WWII secretary is trapped in the office with a ghost and the only way out is to make an unwelcome choice?

Drive-in movies, hot rods, and jitterbugs populate Long Way Home; can one young man survive a bloody night in a historic cemetery with his girlfriend?

Young residents of a cursed Texas town grapple with what they’re willing to sacrifice in order to save their crops, animals and loved ones?

Can a kindergarten teacher silence the talking doll that has frightened her students by solving a fifty year old mystery?

Find out what happens when a college coed gets more than she bargained for with her vintage swing dress.

A lone lady hitchhiker hops a ride in a 1959 El Dorado Cadillac by a roadside grave. Who will be alive at the end of the drive?

A turn of the century jail that housed murderers, liars, and thieves for over a hundred years is taken over by six teenagers on Halloween. What happens when a childhood chant turns deadly?

Those are just a few haunts and haints that populate this world of unrequited love, woe, and mystery. Ghostoria will gnaw the corners of your mind and challenge your ideas about life, love, and death long after you leave.

What Inspired You to Write Your Book?
when I moved to a small Texas town, I saw an ad for a Scare the Dickens out of Us ghost story contest. I decided to enter. I didn’t make finals the first year, but I kept trying. The second and third year I made finals and was short-listed the third year in the top ten. From there, I was inspired and kept on writing ghost stories inspired by our cool old cemetery, jail and old houses around the city center. Eventually, I had enough for a collection.

How Did You Come up With Your Characters?
It’s funny, but sometimes I start stories with a character, but sometimes its a setting. I’d be lying if there aren’t a few characters patterned after me and my family members, but I also substitute teach and find a lot of inspiration with the teachers and students.
This is a collection of stories, so its hard to pinpoint one way I came up with the characters, but most are amalgamations of people I know.
One of the stories, Clouds and Rain came to be in a dream. It was like a gift. When I woke up, I wrote it down, although the African American women in the story is patterned after my niece who has vitiligo that makes your skin look like someone spilled bleach on it and a little Billie Holiday.

Book Sample
“Cut me,” she said. As her lips moved, her voice resonated in his head rather than his ears.
He looked from the body of his wife to the figure at his side. He was sure he’d gone insane. He’d read about that too, but he knew in his soul this was no hallucination. The spirit of his wife looked at him and herself. But she wasn’t dead. She wasn’t dead. She wasn’t dead. He could still see the slight rise and fall of her chest and the contractions roll across her body.
“It isn’t supposed to be like this,” he said aloud.
“It is, it was, it will be,” she replied.
* * *
And then he remembered. A year ago, before he’d lost everything, he’d bolted awake from sleep. His heart hurtling in his chest, a pain ached in his center, his skin crawled with fear. He gazed at his wife, her body curled next to his, her silky rayon gown draped like mist over her brown body. He ran his hand over her thin arm and laid his head on her hip, trying to get the nightmare out of his head. He let his head rise and fall with her even breathing. The dream faded and he went back to sleep, never to think of it until now.
In his dream, Ester had stood before him, her hair in wild curls. A knife in each hand, the blades glistened and dripped dark blood, pooling around her feet. She had spoken those words. “It is, it was, it will be.”
* * *
“Cut me,” Ester’s apparition said again at his side.
“I can’t. I can’t. I love you. You are my life.”
“I am no longer life, but take the life we made. Take it, before it is too late.”
He stared at her. All of his love for her swirled inside him. He was full, yet empty. Tears ran down his cheeks. He thought of the first time he’d seen her.
n n n
She stood behind the microphone, her lilac dress wrapped around her hips and breasts, just tight enough that it tugged the fabric. He pictured his big freckled hands gathering the fabric in his fists and pulling it over her head.
When he finally did, he was surprised to see the white blotches across her belly and thighs, like spilled bleach where no pigment colored her dark skin. Her hands were afflicted too, and he understood why she’d always worn gloves. In their passionate frenzy she’d forgotten her shame, then remembered it, and tried to hide herself, turning her back to him, and tucking her hands under the pillow.
“You’re beautiful,” he said and turned her around, pulling her hands from under the pillow, holding them with his. “My gal has clouds across her body. The heavens have come out of the sky and touched her.”
She smiled and let him run his hand across her clouds.
“And my fella has been touched by the heavens as well. Dark raindrops have decorated your skin with stars.”
She ran her hands over his freckled face, touching one of the millions of dots that he always thought looked like splattered mud. He’d hated them, but seen through her eyes, he was breathtaking. She ran her hand from his face to his arm, tracing the line of brown spots down one arm and up the other. Then across his chest, stomach and thighs. No skin on his body was unspeckled. She touched them all, and then proceeded to kiss them each.
* * *
“It isn’t supposed to be like this,” he said aloud, again.
“We are losing time. Cut me,” she begged.
“I can’t.”