You are here: Home / Children and Young Adult Books / George and the Dragon by Philip Tolhurst 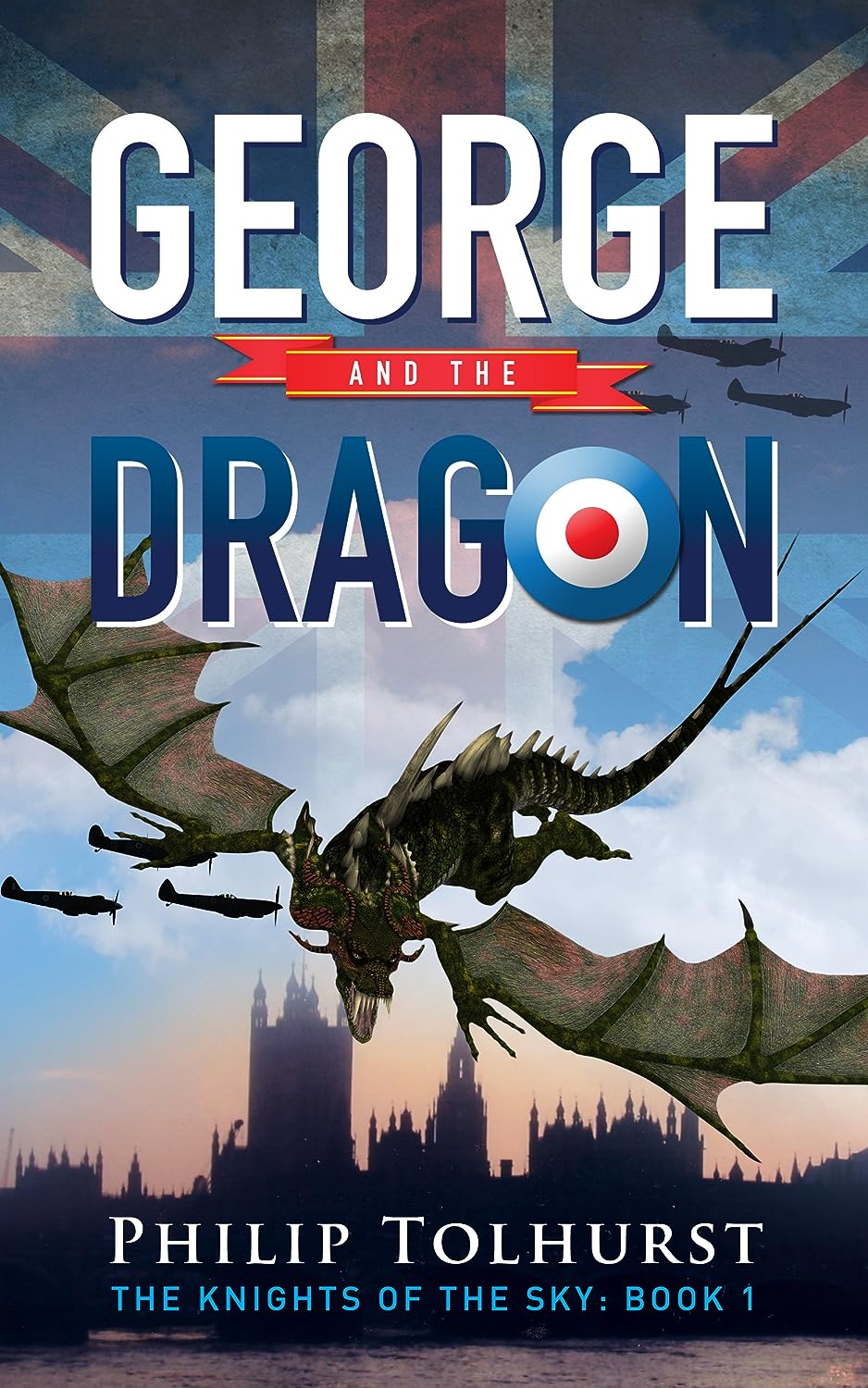 World War II has broken out. The Germans have started to blitz the UK and now they have a new weapon, a weapon so powerful it could end the British war effort before it has even started.

With bombs falling dangerously close to home George Atkins’ mother, Mary, decides to evacuate their home and go to live with his uncle in the heart of English countryside. George’s whole world is turned upside down when five dragons, ridden by Luftwaffe airmen, destroy his uncle’s house. At the same time, with thanks to his father and a group of bumbling British scientists, George becomes the rider of an emerald green dragon he names Spitfire.

The pair and are recruited, albeit reluctantly, by a special unit of the RAF. As the first dragon and rider fighting for the allies, they face the biggest challenge of their lives to save the country from defeat by the Luftwaffe and the evil leader of the Nazi’s forces General von Vogler and his mutant dragon Blitzkrieg.

What Inspired You to Write Your Book?
A simple question and a personal challenge.

The question was: What would happen if dragons fought in World War 2?

To which I could find no answer in any medium; books, movies etc. So I decided to write my own book.

I also decided to write the book to prove to myself and others that I could.

How Did You Come up With Your Characters?
George, the titular character, named himself and has developed from there.

There are four pilots in the book and they represent a condensed version of the different nationalities that really did fly and fight in the battle of Britain.

Otherwise were inspired by movies, myth and real life.

Book Sample
Sokol froze in shock, astonished at what he saw writhing across the sky ahead of him. Sure the Group Captain had told them enemy would be a dragon. They had all been shown the grainy footage at the briefing, listened to that poor pilot’s account of the first attack. But Sokol had not believed a word of it, not truly. Now he did. He watched the beast chase after De La Grange and he believed in dragons more than he had ever believed in anything in his life. He changed the direction of his Hurricane and latched onto the tail of the beast.

The colossal monstrosity appeared to be matt black in colour. Strapped to its back it carried a long, thin metal box sporting Luftwaffe insignia on each side; it looked to be a little larger than a coffin. Beneath this two huge, black leathery wings protruded from the dragon’s body. Each wing was as long as the full wingspan of a hurricane. Sokol looked on mesmerised as they beat against the sky propelling the dragon forward as it hunted for De La Grange’s crippled plane. The dragon’s long tail stretched out behind it and was tipped off with a pair of huge horn like protrusions. Extended behind the dragon, alongside the tail, Sokol traced the outline of the hind legs which ended in huge hand-like feet. Each of its toes in turn ended with a razor sharp talon. Sokol returned his gaze to the beast’s head and he watched in awe as he caught sight of its maw full of yellow, fang-like teeth. Either side of its snout sat a pair of glowing, green eyes. The head thrust ahead of the beast’s body reaching far forwards into the sky trying to snare De La Grange’s Hurricane in its dagger-like teeth. Now Sokol realised why they’d been so heavily armed! He snapped out of his trance, lined up the wide midriff of the beast in his sights and rattled off two quick bursts of cannon fire. He caught sight of the muzzle flashes in his peripheral vision and inhaled. He watched the bullets hit their target and then exhaled in disappointment. They appeared to do very little except make the beast angrier, if such a thing was possible. Sokol called on his years of combat experience and accelerated past the beast. He pulled his control stick left and pushed forward, banking into a spinning dive while slicing past the snout of the dragon. The monster arched its back and swung downwards to follow him. As the hunter became the hunted the dragon unleashed a steam of roaring, yellow flame that poured out of the sky. The flames lapped over the tip of Sokol’s wing. Only a little jink on his stick prevented the Hurricane from becoming a blazing coffin.

Kowalski levelled out his plane and scanned the sky for his target. He caught sight of Sokol flying like a man possessed jinking his plane left and right. Then his jaw dropped as his vision was filled with the great black dragon chasing Sokol’s Hurricane. Unleashing fireball after fireball in an attempt to incinerate the plane and its pilot.

About the Author:
Hello my name is Phil Tolhurst. George and the Dragon is my début novel and was released on St George’s day 2014.

I live in Medway in the County of Kent in England with my wife, Margaret, and two children, Chloe and James.

We’ve been married for 13 years and I’ve spent probably six or seven of those years working on George and the Dragon. For the most part the novel was written while sat on the floor of the train on my hour long commute each day.

Other than writing I have a great love of all things fantasy and Science Fiction. I’m also a big fan of US cop drama shows like the Mentalist, Elementary, CSI, NCSI and not forgetting Grimm which nicely melds to of my loves together. At the moment you can also find me watching Warehouse 13 from the beginning on Netflix.

I have a great love of gadgets and children’s toys like Lego. My ultimate birthday present would be a set of Lego Mindstorms. Maybe if enough people buy the my novel I’ll treat myself.

You can find out about my other books by checking my website here: www.philiptolhurst.co.uk.