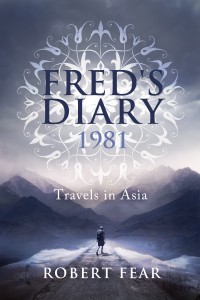 What inspired you to write your memoir?
I have always had an interest in books and literature but never considered myself to be an author, more of a diarist or a travel memoir writer. I have dabbled with short stories over the years but had never published anything before.

My published work is called Fred’s Diary 1981 and is the edited version of a handwritten diary that I kept during my travels in Asia.

This was the only time in my life that I recorded almost everything I did. The trip lasted 158 days and I travelled through Hong Kong, Thailand, India and Nepal.

The second part of my diary was released in 2009 and its title, Time in Thailand, probably indicates to you that things didn’t go as planned. £99 to Hong Kong was published in 2011 and covers the first part of my trip where I did some work as an extra for Chinese television. The complete version, Fred’s Diary 1981, was made available on Kindle and paperback in December 2013. The second edition was published in October 2015.

I am not sure what inspired me to write the diary way back then but the editing of it in recent years has given me great pleasure and bought back a lot of memories. With the advent of Kindle it has been great to be able to self-publish and share my experiences with so many people.

About your Book:
To give you a flavour of the book here is a recent 5* review from Shontae:

A sense of honesty shines through

I really enjoyed this book. I have never visited Asia so I was keen to experience it through this diarised account of a young man’s travels in the 1980’s. A sense of honesty comes through, which is a strong influence in this format of writing as it is an open and detailed account of the people, the places and personal adventures he experienced. I applaud the author for including some of what we might call ‘ordinary’ aspects of travel and day to day living as it reinforces that this is true and not fictionalised. Highly recommended for travel writing fans.

How did you decide how to publish your book and where is it published through:
It wasn’t until around 2005 that I decided to start typing up my diary onto the computer. I managed to get the first two months done but then ran out of motivation.

A couple of years later there was an article in a PC magazine about Kindle and self-publishing that sparked my interest again. I started working on the second part of the diary and released it in 2009. The first part followed in 2011.

By now the bug had truly bitten and I started planning the release of the whole diary. First though, I had to scan copies of all 600 pages as they were deteriorating and writing was becoming faded in parts. Over the next two years I typed everything up and started editing the diary for publication, all in my spare time.

Fred’s Diary 1981 was self-published in December 2013 and has been relatively successful with a good number of excellent reviews on Amazon UK and US. The second edition of Fred’s Diary 1981 has recently been released and it is available on Amazon Kindle and as a paperback on Createspace.

How do you see writing a Memoir as different from writing other genres of books?
Writing a memoir is completely different from writing other genres because it is dependent upon the recollection of events that have actually happened in a person’s life. Some imagination may be required to recall past conversations and happenings for a memoir. This is completely different from the writing of a novel, for example, where a much greater degree of inventiveness is needed to generate the storyline and characters.

Author Bio:
I was born in Leicester, UK in 1955. My family moved south to a village in Surrey called South Nutfield when I was 11 years old. I attended Reigate Grammar School, which was a five mile journey (mostly by train and bus). It was here that I picked up the nickname of Fred.

In 1974, after gaining 3 A Levels (English Literature, British Government & Politics and History) I started work at a private bank in the city, with every intention of working for a year and then going to university. In the end I worked there for nearly 3 years.

During the summer of 1976 I went on a two week holiday with three mates to the Spanish island of Ibiza. We had a fantastic time and all of us vowed to go back for the summer in the following year. Come the next April I went out there on my own, although two of my mates joined me later on. I ended up working in a bar called ‘Grannies’ and loved the whole vibe, met plenty of young ladies and had a great time, but didn’t sleep a lot!

I then returned to the UK for the winter and worked 12 hour night shifts at a plastics factory to get some more money together for the following summer. In the spring of 1977 I set off again, this time to hitch-hike around Europe. For 4 months I made my way through Belgium, Luxembourg, Germany, Austria, Yugoslavia, Greece and several islands, Italy, France, Spain and back to Ibiza again for the last couple of months of the summer.

It was during this return visit that I met Rita and this time when I left the Balearic Islands it was to head for Frankfurt in Germany. I moved in with Rita, who lived with her parents in a house in Ruppertshain, a small village in the Taunus hills.
Initially I got some work on a building site and then in a Coca Cola factory.

By the spring of 1979 there was enough money in the coffers to fund a trip to the States and Canada. I started in New York where I spent a week or so before travelling on a 3 month Greyhound bus pass up the east coast, across Canada, and down the west coast where I stayed in LA for a couple of weeks. Then headed back across the States to Florida and back up the east coast to end my journeys in New York, An incredible round trip.

Back in Germany I got a job as a messenger at the First National Bank of Chicago. Within 6 months I had been promoted to the accounts department as I picked up the language and proved my worth. The travel bug didn’t go away though, I stayed at the bank for 15 months before heading off again, this time to Asia.

Upon my return from Asia I lived in Sachsenhausen, the bar and restaurant area of Frankfurt near the Main, often staying out late and enjoying life. Holiday allowance was generous in Germany and I was able to take 4-5 weeks travelling time off each year. I enjoyed trips to the Canary Islands, Scandanavia and Turkey.

After returning from Turkey in November 1985 my life changed as I got together with the love of my life and in July 1986 I moved back to Eastbourne in the UK to be with her.

We are still together nearly 30 years later and have lived in the same house since 1988 (the mortgage is almost paid off!). We got married in Kenya in 1994 and are cat lovers, having had a succession of rescues.

The travel bug has never completely gone away. We’ve had great holidays in Portugal, Crete, Germany, Australia and the Seychelles.

I had to start from scratch with my career in the UK, but found my niche in accountancy and computer software. I have had the opportunity in the last few years to travel with work and have been all over Europe as well as Singapore, Australia (for a week!), Ghana (at a Guinness brewery) and Suriname (in the middle of the rain forest).