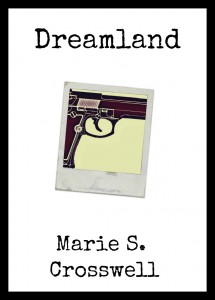 Dreamland is a long short story (8K+ words) following LAPD Detectives Cary Cooper and Dwight McQueen of Central Homicide, best friends and partners who belong to a secret organization within the police force known only to its members as “Containment,” an illegal police vigilante unit of assassins who take out known criminals chosen by the mysterious leaders of the operation.

Dwight and Cary are in love with the same woman, Nora Tate, and together, the three of them form a happy triad. When Polly Page, a dancer at the gentleman’s club where Nora works, is suddenly murdered, Dwight and Cary are assigned the Containment hit on her killer. What they don’t know, as they seek to complete their assignment, is that all is not what it seems. Their careers, their lives, and their relationships hang in the balance.

What Inspired You to Write Your Book?
I write crime fiction almost exclusively, whether it’s hardboiled detective or police procedural or noir or thriller/suspense, and partially because of this, I am a huge fan of author James Ellroy. I read his novel THE BLACK DAHLIA last year, for the first time, and was utterly captivated by the triangular relationship between his characters Lee, Bucky, and Kay, as all as the main plot of the Black Dahlia investigation. My story DREAMLAND was definitely inspired by those characters, and I think that the seed of the story was this idea of my own characters, Dwight, Cary, and Nora, having the unique dynamic amongst them that they do and how their group relationship is ultimately affected by the men’s professional life and secret.

How Did You Come up With Your Characters?
Again, James Ellroy’s characters in THE BLACK DAHLIA were an influence on the ones I wrote in DREAMLAND, but beyond that influence, I think I wanted characters for this story that both reflected the themes of the plot (moral ambiguity, the difficulty of determining what justice really is, humankind’s capacity for violence) and subverted the stereotypes of their professions. Nora Tate is a stripper, but she’s also this educated, intelligent, classy, sophisticated woman who has a greater sense of ethics is more law-abiding than the cops she’s involved with romantically. Cary Cooper is the quintessential masculine cop who falls in love with her but is totally cool with the fact that she makes her money by sexually enticing other men, and he also shares this very deep and emotional bond with his partner and best friend Dwight McQueen, to the point where he’s just as involved with him as he is with Nora and gives Dwight his blessing to be the other man in Nora’s life. Dwight’s a cop, too, but he deviates from certain normative qualities you’d expect a guy like him to have. These people are not at all what they seem, and the reader gets to know who they really are, whereas everyone else in the universe of the story is buying into false images. To a degree, Cary and Dwight have false images of themselves that they’ve been believing, and I think it’s interesting idea that a person can actually be willfully unaware of who and what they are, despite the evidence that’s right in front of them on a daily basis.

About the Author:
Marie S. Crosswell is a graduate of Sarah Lawrence College. She has studied the art of writing fiction with Stella Pope Duarte, Victoria Redel, April Reynolds Mosolino, Jamaica Kincaid, Eric Puchner, and Melvin Jules Bukiet. Her short crime fiction has previously appeared in Thuglit, Plots with Guns, and Out of the Gutter’s Flash Fiction Offensive and is slated to appear in Beat to a Pulp. Her novella “Sex Brood” is available on Amazon.

She lives in Phoenix.

Links to Purchase eBooks
Link To Buy Dreamland On Amazon