You are here: Home / Fiction / Mystery/Suspense / Death Stalks the Principal by Pat Clark 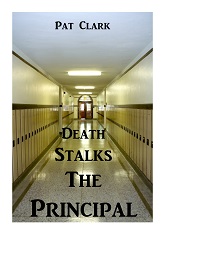 When the principal of a small high school in northern Wisconsin is murdered, teacher Cynthia Allen agrees to take over the job. She’s got support from the superintendent, the students, and most of the staff, but she has no idea how crazy things can get: kids with problems, kids who cause problems, teachers with grudges, parents with agendas, and one more thing: The person who murdered Bill Deagan isn’t done killing yet.

What Inspired You to Write Your Book?
Everybody went to school, so everybody thinks they know what it’s like, but teachers and principals have unique perspectives. There are things we know that can’t be told, there are people we’d like to punch but can’t. I had a fun idea for a mystery where a teacher becomes principal and has to solve tons of problems, one of which is the murder of her former boss. Are any of the characters in the story real? No, but I think you might “recognize” people you’ve met in education: teachers, administrators, staff, parents, and students. Some of them make a room nicer when they enter, and some make it nicer when they leave.

How Did You Come up With Your Characters?
The characters were easy. If you went to high school, you know about the “cool” teachers and the “creepy” teachers. You know that some at school seemed to want you to fail while others simply wouldn’t let you do it. Students, too, fall into loose categories, serious, not-serious, troubled, and clueless. I chose the ’80s as the time period for this book because it was such a fun time with very colorful characters. Who can forget ’80s kids in parachute pants with rainbow suspenders?