You are here: Home / Faith and Religion / Coffee In Manila by A Concerned American 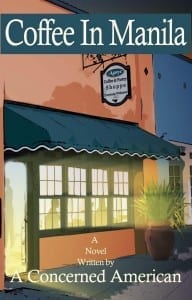 Synopsis: What began for Ryan Tipton as a journey into the heart of Maricel Arcamo, a woman he met online just six months ago, deepens considerably after he travels halfway around the world just to meet her. After spending one perfect week together, everything quickly crumbles after he informs his new girlfriend one week later that he never went back to the States after all. This comes as a complete and total shock to her, because she actually saw him off at the airport last week. They even shared a tearful embrace as her family looked on, before he boarded his plane supposedly headed back to the US. But that simply wasn’t the case. Instead, he remained in the Philippines another week to meet with two other Filipino women he’d also met on the same online dating site, both of whom were just as much in the dark about his secret betrayals as Maricel.

Full of utter remorse for lying to the woman he knew deep down inside he truly loved, Tipton finally places a frantic 3 a.m. call to a man he met just last week, Ernesto Angeles, owner of Agape Coffee and Pastry Shoppe. After losing a daughter to suicide twenty years ago, a senseless death brought about by nothing more than a broken heart, he and his wife, Gloria, eventually turned their pain and grief into action, and set out to do all they could to help prevent anymore of these senseless suicides from occurring in their city. Since that time, thousands of lives were forever changed, most of whom were mixed couples, prompting many to believe that God Himself had ordained this loving Filipino couple to become guardian angels for so many of His hurting and needy people. But in an establishment where love, forgiveness and redemption reign supreme, after what Ryan did to Maricel, was it possible for them to ever be added to the long list of satisfied customers, or were they already too far gone for reconciliation…

What Advice Would You Give Aspiring Writers?
Do not leave this earth with your beautiful music still inside you…

Author Bio:
The author of the books “Coffee In Manila” and “The Pelican Trees” is a practicing Christian living in Florida, who wishes to remain anonymous for the time being. The Pelican Trees is his fifth book, but his first time using the pen name, “A Grateful Believer”. He chose this name for three reasons: 1) as a dedicated Christian, he really is a grateful believer, 2) to bring The Pelican Trees story to life, so to speak (You’ll understand once you’ve finished reading it), and 3) he believes the person responsible for writing any particular book is nowhere near as important as the message contained within its pages.

For his latest book titled, “Coffee In Manila”, he chose the pen name “A Concerned American”.

It is his wish that the message these stories tell will greatly impact each reader, by challenging you to not only contemplate life this side of the grave, but on the other side as well. After all, with the mortality rate on planet earth still 100-percent, each of us will spend eternity at one of two places, based solely upon a single decision which must be made on this side of the grave. That decision will be made crystal clear to each reader of these books. Enjoy reading…

His next book should be released by September 2013. Be sure to check back…

What Inspired You to Write Your Book?
Greetings! I hope this finds you well and completely smothered in God’s limitless love and grace. My name is Patrick William. I represent For His Glory Production Company based here in Florida. We are presently promoting two Christian novels, both of which were written anonymously by the same author under the pen names “A Grateful Believer” for his book titled, “The Pelican Trees”, and “A Concerned American” for his other book titled, “Coffee In Manila”. I’m grateful to say that both books are doing quite well in the Christian communities of the world, in paperback form, for which we are extremely thankful to God. In fact, “The Pelican Trees” is even being considered for a future movie, probably in 3-4 years from what we’re told. We are just now grasping the power of e-books and are excited to now have these books widely posted online. Actually, they’ve been posted for more than one year, I believe, but we never took it too seriously. I know, I know, big mistake, right? LOL! It will be my pleasure to send you a copy of both books, in paperback form, for your perusal and review. I look forward to hearing back from you. God bless you and yours..