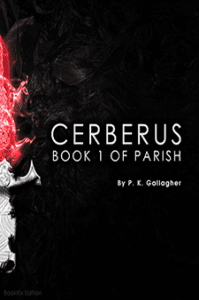 For Kaeden Parish, life in Solace has always followed certain rules—everything makes sense, everything can be planned for, and everything is as it seems. Unfortunately, the secret harbored by his gorgeous, albeit guarded girlfriend is about to shatter all of that.

After a successful attack on his life opens his eyes to a world of war, shadows, and supernatural creatures—a world he didn’t plan for—Kaeden finds himself resembling the sort of monster he has always feared. As he desperately struggles to resist a new temptation, danger draws ever nearer, threatening the ones he loves most. A prophecy tells of a final battle and great destruction, and Kaeden must decide which side he is on, a choice that could mean the end of the world.

In Book 1 of the Solace Series, P.K. Gallagher pulls readers into a realm where good and evil are at war, and the outcome of it all rests on one young man’s decision to either go and live…or stay and die.

How is Writing In Your Genre Different from Others?
Mathematically speaking, it is possible for one infinity to be larger than another infinity. For instance if you consider the set of all natural numbers—that is, all the positive whole numbers in existence—you’ll realize that the list of qualifying numbers goes on forever in a single direction. If you then consider the set of all integers—that is, both positive and negative whole numbers—you’ll realize that this list goes on forever in two directions. By this logic, the second infinity is twice as large as the first. Kind of mind-boggling, no?

This difference, to me at least, is a fair representation of the difference between writing general fiction and speculative fiction. In both cases, the possibilities for storytelling are infinite, limited only by a writer’s imagination. However, there are possibilities open to writers of speculative fiction that are not open to other fiction writers. When you’re writing speculative fiction, your characters don’t have to be bound by things like the laws of physics or of man. You have the absolute freedom to create your own world with its own set of rules, which I think is extremely liberating. It’s just a matter of deciding what story you want to tell and then telling it however you want.

What Advice Would You Give Aspiring Writers?
Keep writing. Don’t listen to anyone who says it’s a waste of time, or that you’re not good enough, or that the odds of success are too low. If you’re passionate about writing, then write. Create something you’re proud of, and no one can ever say you didn’t succeed.

Author Bio:
Despite writing stories that take place almost exclusively in New England, 22-year-old speculative young adult fiction author P. K. Gallagher has lived in the suburbs of the south her entire life. It is to this that she attributes her love of the fantastic and the supernatural–writing such things was her favorite escape from the banality of Suburbia. Gallagher graduated from Florida A&M University in 2013 with a bachelor’s degree in journalism and currently lives in Atlanta where she continues work on her series and standalone projects.

What Inspired You to Write Your Book?
This book began as a character development exercise but quickly grew as I saw the opportunity to analyze the human tendency to look only at the small picture, to ignore the problems we all face in favor of clinging to our own prejudices and preconceived notions. I wanted to tell a story that both examines the reasons behind this while warning against the terrible repercussions that can occur as a result. At the same time, I wanted to write a story about the paranormal, something that has always interested me. The result of these desires is Cerberus.