You are here: Home / Fiction / Science Fiction / By the Stars by Jessica Marie Baumgartner 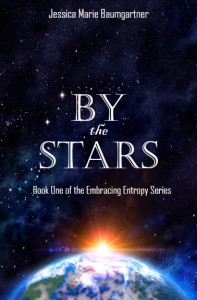 Allie is faced with her worst nightmare as she boards a space ship that will transport her and her children from their home forever. The human population has dwindled to around 15,000 as the Earth’s become hostile. If they stay they will die. The alien race who’s come to their rescue seem to have no concept of selfishness, but Allie has her doubts. She’s separated from her husband and left to fend for her family on her own. It’s up to her to make sure that they survive the trip across the stars.

What Inspired You to Write Your Book?
It was originally supposed to be a short story for an anthology I wanted to submit to.

How Did You Come up With Your Characters?
They are based off of me and my daughters

Book Sample
I used to have nightmares about this. I would wake up screaming as they forced me to leave. People giving up; abandoning Mother Earth. The thought alone caused my heart to race, my under arms to sweat.

Here I stand clutching my children, one on each side, as we prepare to be torn away from everything that’s tangible. Before me, a gargantuan structure glares from above. This beast, this ship is supposed to save humanity, or at least what’s left of it.

I’ve lived through mass devastation. It’s hardened me enough. But leaving? It still scares me.
We have no idea what’s out there for us.

My husband has faith in the alien colony that is aiding us. They made contact just in time. Said they had revolutionized their space program and stumbled upon our signal.

I don’t know what I believe.

As the line moves forward, I pull my girls along. They stumble ahead with fright, carrying their backpacks strapped to their bodies. Our packs are the only human luggage allowed on the crowded craft. But that’s not what they’re worried about.

It’s not the new race they fear. Or even the new world. It is the missing presence of their father.

He has his duty. He’ll stay with his men until we pilgrims are secure, then meet up with us in a smaller craft. I’m glad for it. They’ve already had to break up some fights. People get pretty riled up in situations like this. It’s good to have someone who remains behind to keep order for a while, and to try and find any last survivors before leaving.

Finally we’re ascending the dock and I’m able to see our temporary home. It’s nothing like I imagined. The smell is what draws my attention first.

The odiferous enclosure is beyond human comprehension. I’ve smelt plague pits, leaking sewage, the rank smell of sea life left to rot on beaches. Although this isn’t as horrendous, it does make my eyes water. Despite the nausea I’m fighting, I grind my teeth. “Gwen, these people are saving our lives. Don’t insult them.”

“No,” I demand, and watch her eyes swim as she lets go of her nose.

“Look.” My eldest, Maddi distracts us as she points to one of the aliens.

I spot them as the line moves up – the Cih’lnarians. We’ve glimpsed them from afar before. Closer, they’re not as unsightly. Definitely not of this world, but the lack of symmetry in their bodies is more becoming inside boundaries built for them.

The contrast of the human official standing beside the alien as we enter sends my thoughts spinning. Cih’lnarians are about a foot taller than humans, with grey skin, and lop sided features that often give them the look of melted wax. Still unused to these new people, I do begin to compare facial expressions as the man converses with the alien beside him. They seem to smile the same.

The ship itself looks off. Doorways, landings, stairs, none of the usual architecture is visible, just walls. Walls everywhere, but none of them reach the ceiling. It’s a network of big squares, meant to contain us, to keep us out of the way. I don’t know what I expected. Our own officials gave the craft a once over and approved.

Group by group, each living boundary is divvied out. When it’s our turn, the alien in charge of us hands me a chip with a symbol on it, and points the way. As we walk along, we can see that none of the cubicles have doors. There are light beams that penetrate up from the floor to create a boundary. It offers a slight comfort, but anyone could walk in. I desperately hope that the neighbors opposite us are reasonable enough. One sliver of hallway between strangers can leave a person feeling exposed.

I’d heard about this. The Cih’lnarian culture doesn’t know the ideals of living separate. They consider themselves one being; like a single hair growing from our bodies. Very seldom do we concern ourselves with the individual follicles unless there’s a problem. They’re only concerned with the greater good.

I admire their lack of selfishness, but it makes me feel insignificant.

Gwen runs to a corner and jumps onto the stuffed bags meant for sleeping. “We can all snuggle up together.” She smiles.

Maddi rolls her eyes. “Just don’t drool on me, okay?” She tosses her pack aside.

I linger at the opening and take in the grey walls that reach around to hold other families. I try to be grateful. At least the girls are.