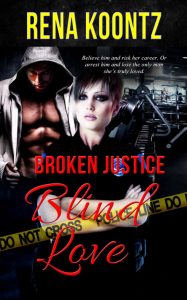 He is a suspect. An accused killer. And Trish Kleerey is the law. Patrolman Kleerey stands tall, speaks assertively, and sees right and wrong as clearly as her black and white cruiser. Commit a wrong and face the consequences. But her strict moral code is challenged when her investigation into a series of murders incriminates the man she loves. Her training tells her to arrest him. Her heart screams otherwise.
Bryan DeJewel feels the line between love and the law blur when Trish questions him about the serial killings. The Trish Kleerey he knows is soft, warm, and capable of bringing him to his knees with desire, but that passion isn’t enough to build a lasting relationship. It’s as plain as her black and white cruiser: If she loves him, she must trust him.
Trish’s suspicious nature already cost her a lifelong friendship. She couldn’t turn her back on the physical abuse she suspected her friend suffered but, once again, her questions alienated a person she loves. Believing Bryan means turning her back on hard evidence, breaking the rules and risking her career to prove his innocence.
Meanwhile, the real killer watches and waits, hoping she’ll fall into his deadly trap.
Trish’s dilemma: listen to her heart and choose love, or strap on her gun and enforce the law?

What Inspired You to Write Your Book?
This story is based on several real-life moments: the murder of a real estate agent that remains unsolved; the actual female police officer who inspired the character Trish Kleerey; the true domestic violence victim who suffered so much and for so long before finally, and safely, getting out; and the piece of eye candy at my gym every day who inspired the character Bryan. We did in the book what we couldn't do in real life! These were all things I simply had to write about.

How Did You Come up With Your Characters?
My characters are usually based on real people. They are people who inspire me or intrigue me or they've wronged me. Those are the ones I knock off. It's very therapeutic. I take bits and pieces of their lives and weave them into stories based on actual offenses.
Plus, all of my books focus on law enforcement in a good light. To me, these are the good guys.