You are here: Home / Bargains and Freebies / Bargain Books Under $3 / Broken Hearts and Loving Souls by Julianna Hughes 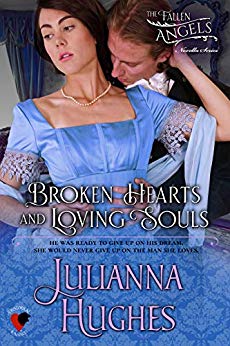 A second chance at life.

Lady Cora Heathman spent her adult life being punished for an adolescent love affair with a stable boy…Punished by her parents by being forced to marry Baron Heathman, a man as cruel as he was worthless, then punished by Heathman himself. Abused and discarded at the family’s farm, Cora carries on by raising her beloved children. However years have passed and Heathman wants to be done with Cora once and for all. When he’s killed because of gambling debt, Cora is finally free. But will scars both mental and physical keep her from taking one last chance at happiness?

A second chance at love.

Jamieson Malcomson gave up everything when he became a surgeon. Disowned by his family for choosing a career beneath his station, he still felt he made the right decision. Until he was unable to save a young girl’s life. When he meets the elegant Lady Cora he is immediately attracted to her. Despite her diminutive size and her disability with her left arm, she is a furious woman, protecting her two daughters, and sparks fly from the moment they met. Cora is also attracted to Jamie. But after her horrible marriage, getting involved with another man is unthinkable.

However, her eldest daughter is now married and Cora needs a new project… Helping Dr. Malcomson reclaim his practice seems like a good way to pass the day. And every doctor needs a nurse at his side.

What Inspired You to Write Your Book?
For as long as she can remember Julianna has been fascinated with pirate stories and early English and French history. She has now combined her love of history and writing to create stories with strong women and enduring heroes – often where the heroines do the saving!

This book is the fourth novella in The Fallen Angels Series, and was written to give Cora her own story, after she has been a side character in previous romances in the series.

How Did You Come up With Your Characters?
I base a lot of my characters on actual people from the regency area – most from American history. I do so much research into the historical era in which I write that I find many fascinating, and mostly untold, stories of amazing individuals from our own country's history. While I do not take their stories entirely to use in my own work, I do often find inspiration in their journeys and give tribute to them by creating characters with similar beginnings, struggles, or innovations to move beyond the confines of their time.

Book Sample
“Jamie, what do you want from me?” It hadn’t been what she was planning to say. It was way too personal. Yet now that the question was out, she was not going to take it back.
Time seemed to stop as they stood alongside the road. His chest rose and fell as he breathed. A bird flittered in the distance. And the soft breeze worked loose one of her curls and tickled it across her nose.
“Ah, lass, if only I were free to be tellin’ you what I would like from you,” he whispered into the silence.
A warmth infused her heart and settled in the pit of her stomach. It churned and bubbled there before sliding to the core of her womb. His words both excited and scared the hell out of her. She hoped she knew what he meant. And at the same time, she didn’t know how to respond. It had simply been too long since she had flirted with anyone. The last man she had flirted with had been murdered because of her.
“Just what is that supposed to mean?” she demanded.
Her voice had been harsher than she had meant for it to be. Yet she couldn’t seem to prevent it. As much as she wanted to have an affair with him, she didn’t know how to move forward and was too tense to reply coquettishly.
He held her gaze for several seconds. She could feel the wind on her face and the fluttering of her skirt against her legs. Legs that were growing unsteady the longer he gazed at her. In the short two months she had known him, Jamie’s face had become quite dear. His ice-blue eyes haunted her dreams. His soft, deep, Scottish brogue enticed dreams Cora had long since given up.
Regret and something else darkened his eyes, and then he turned away as his arm dropped back to his side. His hands fisted so tightly that the dark tan on his knuckles turned to white.
“Lass, you ken that I’m a man without a home. Without a vocation to support myself. Since the end of the war, I’ve had to throw myself on the charity of my friends in order to feed and clothe myself. I’ve no right to be askin’ anythin’ of you. You’re a gently born lady. And I . . . I am . . . I am what I am.”
“And just what is that, Mr. Malcomson?” Cora demanded. She was beginning to feel rejected, which was ridiculous. He wasn’t as much rejecting her as disparaging himself.
“Woman, I told you, I’m a homeless vagabond. A man without a home or income. I’ve no prospects and no future. After we finish workin’ on your bairn’s house, I’ll be adrift with nowhere to go and nothin’ to do to support myself.”
The despair in his eyes tore at her heart. But he was wrong. He was a medical doctor and an experienced surgeon. A damn good one from what she had seen. If she believed what Ricarda said about him, Jamie was one of the best surgeons he had ever seen as well.
She was just about to tell him so when he turned away and plunged a verbal knife through her heart. “Cora, you’re a well-bred lady. You shouldn’t even be talkin’ to the likes of me. You need to be setting your sight on a man who can be keepin’ you in the lifestyle that you deserve. Not a man who is as poor as a church mouse and little better than a stable boy.”
Cora saw red. They were nearly the same words her parents had used twenty-six years ago when they had sent Patrick O’Mhalle away and forced her to marry Baron Heathman.
“How dare you,” she hissed and stepped forward and pummeled his chest with the Seawrights’ basket. The contents when flying as he stumbled backward, his eyes as wide as saucers as he stared at her disbelievingly. She was too angry to care and advanced on him, swinging at his face with all her might. His hands flew up and he began backpedaling away from her as fast as she advanced on him.
“I’ve loved one man in my life.” Wack. “And my parents sent him away because I was too good for him.” Wack, wack. “And they forced me to marry that monster all because he was a gentleman. A titled peer.” Wack, wack, wack. “And when that titled monster discovered I once loved a poor stable boy, do you know what he did? Do you!?” She screamed the last. “He. Murdered. Him.” Her fist jerked back and covered her mouth as tears began coursing down her face. “He murdered the man I loved, not because he was jealous, but because Patrick was nothing but a lowly stable boy. And there was nothing I, or anyone, could do because he was a peer and Patrick was a nothing. A nobody in the eyes of the law and the peerage.”
She turned away, seeing nothing save her past and the horrors she had had to survive. “So, don’t you dare tell me I deserve somebody better than you.” A sob exploded pass her lips, and she pressed her fist against her mouth harder. Through her broken sobs she demanded, “And just what makes you think I want you in the first place?”