You are here: Home / Non-fiction / Business Books / Boomercide: From Woodstock To Suicide 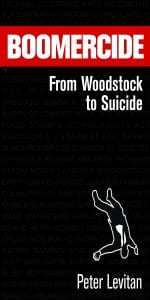 Peter Levitan has scheduled his own death.

Peter believed that after working 35 years he had set up a smart retirement plan. After the housing collapse, the financial meltdown and the continuation of an unstable economy, he realized that there were just too many variables out of his control to make any plan a guarantee. This book is about how Peter takes back control by eliminating one of the biggest uncertainties in future financial planning; his own life expectancy.

Boomercide: From Woodstock to Suicide chronicles this Baby Boomer’s need for personal control over his future and his resulting decision to use suicide as a financial planning tool.

His research reveals that he is not alone. Baby Boomers haven’t saved nearly enough and have the highest suicide rates in the U.S. and that rate is dramatically on the rise.

Boomercide: From Woodstock to Suicide examines the concept of rational suicide, the act of suicide itself, religious and moral views about suicide, and Peter’s very personal decision to schedule his own death, complete with his family’s reaction.

Rational suicide as a solution… what do you think?

Peter Levitan spent over 35 years studying the Baby Boomer generation in his role as a senior executive at Saatchi & Saatchi Advertising Worldwide, the world’s largest advertising agency, as the founder of successful Internet publishing and technology companies and the owner of his own national marketing agency. His clients have included General Mills, Johnson & Johnson, Microsoft, Nike and the United Nations. He was named the Newspaper Association of America’s New Media Pioneer in 1999. Peter grew up in Manhattan in the 50s and 60s, went to Woodstock and has lived across the U.S. and Europe. As a teen, he stumped the panel on television’s To Tell The Truth by claiming to be a National Science Award winner who experimented with LSD and he represented the Baby Boom generation on the short-lived TV show The Generation Gap. Boomercide: From Woodstock to Suicide is just the beginning of what will be an evolving series of books and blog entries about the 76 million Baby Boomers: our history, successes, dreams and retirement opportunities and issues. Peter’s popular Baby Boomer blog lives at Peterlevitan.com.