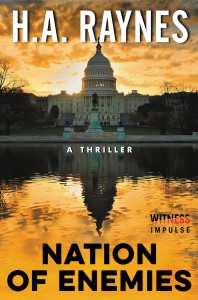 Turned away at London Heathrow Immigration because of his wife’s and unborn baby’s inferior DNA, Dr. Sebastian Cole returns to work in Boston’s Mass General hospital. He purchases ballistics skins for his wife and son, as well as himself, a bulletproof car and a pre-fab house in a Safe District. His family’s safety is paramount: with the War at Home, there are never enough precautions.

It is 2032. Legions of lone wolves and militias have struck fiercely since The Day the Planes Fell. For the ten years since that colossal attack, Cole has treated survivors of the terror in the ER. But his oath to Do No Harm gnaws at him as he updates the biochips that, by law, every citizen must wear. If their numbers dip below the “clean” benchmark of 75, he’s condemning them to a life without employment, without a home, a life of eternal struggle. After he loses another loved one in an attack, a seed of revolt is planted in Cole and he begins an underground revolution to restore civil liberties and wipe away the inequity of biology. Along the way he’ll risk his family, his career and his life when he discovers the U.S. government poses a greater threat than the terrorists themselves.