You are here: Home / Fiction / Science Fiction / Auraman the Beginning by B.E.STARLIGHT 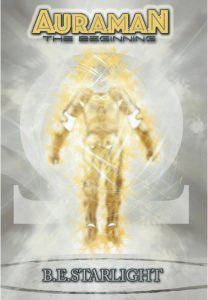 From the psychedelic mind of B.E STARLIGHT comes a new hero: AURAMAN;

A being of solidified light, born to a barren couple, with the assistance of the famed Dr. Bearlight, a fertility expert and a mystic, who introduces them to the “Singularity of thought” and a new reproductive process called “Aurafusion”.

The Dr. disappears at the completion of the unusual conception, and imparts the new born child with unfathomable abilities

Glenda, a Nano technology expert, and Osiris, a Parapsychology researcher, embark on a mission to scientifically validate paranormal, and supernatural claims, thus, setting the stage for mankind’s warm welcome of their son’s eventual emergence into the world scene

As one wondrous event follows another in an incredible pace, the final battle between good and evil stunningly unfolds, while earth existence and humanity’s own survival hangs in the balance.

This book was written for , people of faith and those without, Trekkers and Star Wars fans, yoga and meditation practitioners, seekers of spirituality and all of you who continuously ponder what it would be like to possess the powers of a god.

What Inspired You to Write Your Book?
As a a lifelong practitioner of meditation, creative visualization,Kabalah and other spiritual and magical practices. I was always fascinated with the possibility that somehow magic and superheros will become commonplace and part of our everyday reality.

After all,isn't that why we flock in droves to see those tales unfold in front of our eyes on the big screen?

My book "Auraman the Beginning" is indeed a manifestation of this deeply held longing for the supernatural to be actualized within each and every one of us.

How Did You Come up With Your Characters?
Coming up with the characters was somewhat arduous;The main character was easy to come by,as it gestated in my mind for quite sometime, but the remainder took a lot of "day dreaming" and constant meditative sessions in front of a flickering TV screen,an actual mental exercise I used in the plot.

Amazingly enough I did not experience any writer's block,but conjuring up few of the characters did require some extensive research on my part in an attempt to keep the plot unique , unfamiliar, and distinct from others

Book Sample
Annette ran toward the cat, hoping to catch and save the feline
from her impending doom, but alas, the limo appeared to be seconds
away from hitting her. Aura’el leaped forward, bypassing Annette
and successfully grabbing a hold of Tipsy while looking directly at
the approaching wheels. Glenda screamed in horror as it looked as if
both her son and the cat were about to be crushed by the advancing
monstrosity of a car.

“Stop!” Aura’el shouted, extending his left arm forward and
signaling the driver to stop. Suddenly, a tremendous explosion was
overheard throughout the street as a colossal round shield of light of
about thirty feet in diameter appeared out of nowhere and separated
Aura’el and the limousine. The car proceeded toward the shield and was swallowed by it on its entirety, disappearing into thin air.

A moment later, an ethereal glowing version of the limo and all its
occupants burst out of the shield and ran through Aura’el as he was
standing and holding Tipsy in his hands. It took nearly ten seconds for
the elongated luminescent car to pass through the two of them as both
seemed to have been stripped of their solid corporeal state; the shield
continued to make crackling noises as its density waned while Aura’el,
Tipsy, and the limousine gradually regained their solid state, fluxing
and phasing in and out of existence, appearing and disappearing as their bodies coalesced and settled back into their normal forms.

The limousine finally came to a halt, and the driver got out,
looking disoriented and pale, shaking and trembling in fear. “What
just happened?” he asked Glenda, who rushed toward Aura’el, hugging
him tightly and holding him close to her waist.