You are here: Home / Bargains and Freebies / Bargain Books Under $3 / Aspiring, Part 1 of the Siblings’ Tale by Astrid V.J. 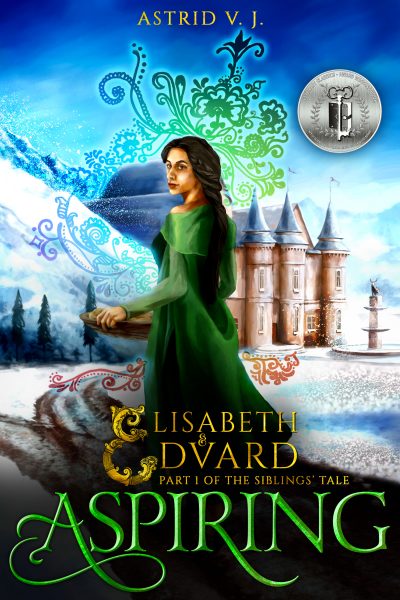 Aspiring, Part 1 of the Siblings’ Tale by Astrid V.J.

At her mother’s death-bed Elisabeth learns that her mother’s illness is no accident and that her own life is in danger. Evil witches are plotting to take over the kingdom of Vendale. All alone, naive and untrained, Elisabeth’s determination is all she has to confront her mother’s murderers as she discovers love at the same time. While Richard’s behaviour sends distracting mixed messages, Elisabeth finds herself stuck in limbo: she is treated like a child but is forced to make adult decisions. Meanwhile, the witches’ plot spins a fateful web around her. Can Elisabeth succeed in the face of insurmountable odds?

What Inspired You to Write Your Book?
When I was fifteen, I read Ella Enchanted which I adored but which also left me dissatisfied. I loved the style. I adored the backstory of Ella and her prince meeting and getting to know each other before the ball. At the same time, I was saddened by it being yet another Cinderella story because there are so many amazing fairy tales out there, and yet, our current society is obsessed with only three. The Siblings' Tale duology is the result of that combination. Aspiring, Part 1 of the Siblings' Tale provides the backstory in a style reminiscent of Ella Enchanted, while Becoming, Part 2 of the Siblings' Tale is the retelling of the Grimm Brothers' lesser known tale, Brother and Sister.

How Did You Come up With Your Characters?
Elisabeth, the main character of The Siblings' Tale duology, embodies both the aspects of myself I despise the most and everything I aspire to be. Essentially, she is me at my worst and becomes what I consider to be my greatest potential. Edvard was a tricky character to write. I don't have a brother and have an excellent relationship with my sisters. I drew on my friends' relationships with their brothers and twisted Elisabeth and Edvard's story into an extreme of what I saw around me. Richard embodied everything that I, as a nineteen year old (when I wrote the first draft) wanted from a romantic relationship. The miracle in that is it turned out to be my visualisation of my dream man and I met my perfect match less than six months after writing the draft. We are happily married and have two children.

Book Sample
Prologue:
What a mess! Viola Alerion thought in dismay. The newly appointed high-archivist of the Imperial Grand Library raised her light-stick to fill the Hall of Unregistered Histories in gentle, golden light. She gasped in horror at rows upon rows of heavy wooden shelves. She craned her neck, but the towering stacks vanished into the darkness above her, beyond the reach of her light-stick. It was the contents of the shelves, however, that caused her heart to constrict. Horror turned to mirth. A giggle escaped her usually serene lips at the parchments, scrolls, and bound volumes which had been stuffed onto the shelves higgledy piggledy without consideration for the rigid orderliness that characterised other parts of the great library.
As her gaze absorbed the extraordinary disorder which gripped this particular hall, Viola felt herself at the edge of the abyss. How, in the emperor’s name, was she ever going to find the manuscript which could bring her the distinguishing mark of imperial high-archivist? Her new position did not merely require overseeing the smooth running of the library and helping nobles from the palace find something captivating from the archives; no, her duty was also to entertain, to contribute to the empire by producing historical texts worth reading. Viola was acutely aware of the importance of her first publication which would become the hallmark of her career.
How—in all this mess—was she ever going to find the perfect manuscript to secure her future? Picking up a large volume at random, Viola thumbed through it, pausing to read a section here and there. She slammed the book shut with a resounding slap—shuddering and grimacing in distaste. Some people had no concept of storytelling. Sighing, Viola wondered whether she should have accepted the second-archivist’s offer to send some filing specialists to bring her a selection of manuscripts. Viola shook her head. No, she had to do this herself. There was no point in sending some underling to bring her something when she didn’t even know what she was looking for.
Viola turned back to the shelf in front of her and began searching through the documents it contained. Within a few hours she had identified the system used to sort the manuscripts. Once she had a grasp of it, it took Viola no time at all to find the period and area which she hoped would provide her with a manuscript worthy of her talents. Sure enough, after but a few days spent searching, the high-archivist’s triumphant shout echoed through the silent hall of musty vellum and parchment. At last, her true work could begin!

Foreword:
Here follows the account of the great queen of the renown kingdom of Vendale. The original manuscript was discovered in the Imperial Library and has been faithfully copied here. Unfortunately, the queen’s manuscript only tells part of the story. The historian has taken the liberty to complete the tale within her skills based on the historical records remaining from this time. Some licence has been taken in the manner this second part of the tale is presented, attempting to remain true to the tone of the original section.
I would like to add, that although many centuries have passed since the events recounted here, this tale still holds many truths for our day and remains one of the favourites among our children, especially as Queen Elisabeth and King Richard are today seen as the founding monarchs of this great realm—those who planted the seed for this empire’s beginnings.

Please join this author’s email list
For joining the author’s email/newsletter list you will get:
A free ebook copy of The Last Warrior, a novella in The Wordmage's Tales series