You are here: Home / Fiction / Paranormal / Archive of Sinners: Lust by Sanzaki Kojika 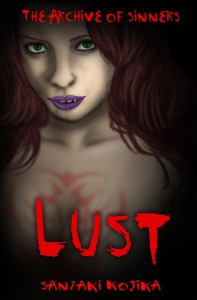 In their tiny Chicago-land office, Vere and his partner Thomas take any case big or small, and will do anything to see it solved. A woman hires them to find out the truth behind her boyfriend’s sudden illness, but when their case takes a turn towards the supernatural, they might not be enough. When Thomas falls prey to their mysterious attacker, things only get worse. Armed with minimal knowledge and left to fend for himself, Vere’s in for the ride of his life. He might have found help, but his new partner is a creature of nightmares herself – a Succubus.

What Inspired You to Write Your Book?
The original concept was actually from a dream I had. The main team was a psychic human, a succubus, and a werewolf. I really liked the concept, and I always wanted to do a detective based story, but felt I was weak with mystery genre. I thought the paranormal aspect was an interesting twist on it, and something I dealt with better. I came up with the concept for the title and each book being a different “Sin” when I started outlining what I would put in each book.

How Did You Come up With Your Characters?
The general concept also started from the same dream, but there were quickly several problems with the characters. Vere was one of the trickiest, and he was almost too cynical to “survive” on his own. Thomas was a great addition, and the contrast of character to Vere was fun to work with (since I’m more like Vere than Thomas in most cases). Priti is still my favorite character to work with. I wanted her to come across initial as very mysterious and dangerous, and while she never loses that, she’s a very human character at her core. She’s eccentric and living life fully. In some ways, she has many things I strive towards. Each character has a specific reason why they are in the story, but a lot of that reasoning will be explained in book.

Book Sample
I watched her disappear into the boat and just stared at the empty yacht while standing in the same spot for several minutes. Eventually, I got impatient, and I started to pace up and down. While I paced, I made note of the other boats parked nearby. I tried to look for anything suspicious, but I couldn’t find anything that stood out.
I quickly was getting impatient. I pulled out my phone and clicked it to life. It was close to six o’clock; the sun would be completely gone in a short time. The street lights were slowly blinking on, breaking through the falling darkness. There was one just a few feet away from me. I glared up at it, as if it was to blame for me having to wait.
Just as I was about to put my phone away, the screen suddenly went black. I tapped it impatiently, but it was completely dead. The streetlights and any lights on the boats nearby me all went out a quick second later.
I felt the energy immediately. I didn’t know what it was, but I didn’t like it. I rushed over to the edge of the dock, standing on tiptoe in a futile attempt to peer over the edge of the ship. I could see nothing in the darkness, even if I had been tall enough to see over the railing.
I cursed silently and shifted on my feet. The place was strangely quiet. I waited another half a minute to see if the succubus would show her face, but she didn’t. I guessed I had no choice.
Unlike her, I had to climb onto the boat the normal way. I found the ramp leading up to it near the front and slowly stepped onto it. It was strange that it was down, but that must have meant someone was actively using the boat. The wood creaked beneath my feet and I could swear it swayed a bit. I tried to shake off my uneasiness and hurried the rest of the way up onto the boat.
I quickly made a sweep of the deck, looking for any sign of a struggle or anything out of place. It was hard to see in the dark, but even so, nothing stood out. I waited a couple minutes, daring anything to appear. When nothing happened, I went to the door of the wheelhouse (I think that’s what they’re called). I turned the knob and it easily gave away beneath my fingers.
I slowly pushed the door forward, peering into the darkness behind it. It groaned with the movement, and I grimaced against the noise. Nothing moved in the shadows at the sudden noise though. I pressed it open the rest of the way, moving as slowly and quietly as possible. I slipped inside, leaving the door a crack open behind me.
The inside was dark and quiet. I quietly moved throughout the room, groping around carefully in the dark. The dim light from the stars and moon couldn’t break the darkness inside. I stayed near the wall, circling through the room until I was back to the door. I found nothing unusual still. My heart was pounding.
I picked up something heavy and blunt from off a table and moved back towards the door near the back of the wheelhouse. My heart thudded even faster as I moved towards it. There was only one other place the succubus and whatever she found could be.
I tried the door and fortunately, it was also unlocked. I cracked it open, but all I could see was more darkness. I took a deep breath before I went inside.
I clung to the thin, metal railing as I climbed down the small staircase that lead to the lounge of the boat. It was cold against my skin, but I was probably sweating. As I neared the bottom, I could see a flash of light.
There was a sudden, ear-splitting screech and I ducked down on the stairs, clinging to the railing with one hand, and my makeshift weapon in the other. An angry scream met the noise, and there was a loud crash, followed by another flash of light.
I stayed on the stairs, trying to figure out what was going on. There was another thud and I felt something brush past me. I might have panicked a bit. I blindly swung the statue I had picked up into whatever moved past me. I heard an angry screech and something hit me hard on the shoulder.
I tumbled down the stairs and crashed to the ground below. I couldn’t even hear the footsteps as whoever it was moved up the stairs, but I could feel the energy dissipating.
“Dammit!” I heard a familiar voice in the darkness.
A few seconds later, the lights all suddenly came back on. I blinked as I pushed myself up to my knees. I slowly glanced around.