You are here: Home / Fiction / All For A Good Cause by Barbara Phinney 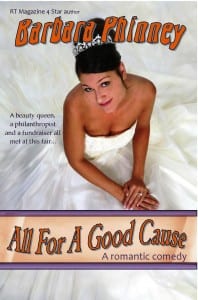 With the ‘fun’ put back in fundraiser and relatives firmly entrenched where they think they should be (in her personal life), Janet Jemseg struggles to stay sane at a local charity function. And it becomes all the harder when hunky philanthropist, Devin Kidder, suggests the unthinkable — a wedding. To him.
Her quiet summer just went south. But it’s all for a good cause, they say.

Biography
Barbara Phinney retired from the military to raise her two children and soon turned her creativity toward writing. That’s when she asked herself, what was the hardest genre to write? Romance. Nearly twenty years later, she’s published in that genre, going on to final in several contests and take the plunge into the self-publishing pool, with Souvenirs, set in the shadow of the bridge to Prince Edward Island, on the warm beaches that inspire her. Barbara lives in Eastern Canada with her husband, several barn cats and some chickens. Her own brood has flown the coop.