You are here: Home / Fiction / Historical / A Greater World by Clare Flynn 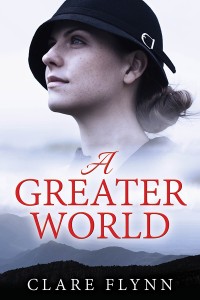 When Elizabeth Morton’s father wants her to travel to the other side of the world to marry a stranger, she thinks he’s gone mad. This is 1920 and a woman has rights – she’s not going to be subject to an arranged marriage. But she’s reckoned without the brother-in-law she’s always despised, who shatters her comfortable world, leaving her no choice but to sail to Australia.
When Michael Winterbourne, a lead miner wakes up with a hangover after his engagement celebrations, he has no idea he is about to cause a terrible tragedy that will change his life and destroy his family.
When Michael and Elizabeth meet on the SS Historic, bound for Sydney, they are reluctant emigrants from England. They hope their troubles are over, but they’re only just beginning.
A Greater World is a historical romance set in the early 1920s. The story moves from the dales of Cumberland and the docks of Liverpool to Sydney and the beautiful Blue Mountains.
A Greater World is a B.R.A.G Medallion Honoree.

What Inspired You to Write Your Book?
A visit to the Blue Mountains of Australia in 1999 inspired the location. A photograph of some old lead-miners cottages in the North of England inspired the story of Michael Winterbourne – as did living in Sydney in a building that was once a wool market. My grandfather was a sea captain so I’ve always loved ships. I can’t honestly remember where Elizabeth Morton came from – other than my fevered brain! My six months working in Sydney caused it all to ferment and then I sat down and wrote it. Unfortunately I had then to sit down and write it again after the first draft was stolen with by un backed-up laptop!

How Did You Come up With Your Characters?
I find this well-nigh impossible to answer. They force their way into my consciousness. They live with me.

Book Sample
Michael stared at the featureless expanse of open sea, as the wind cut the back of his neck in the space between his collar and the back of his cap. His coat blew open as the strength of the gale increased. It was going to be rough. The steward had warned him earlier that they were in for a bumpy passage across the Bay of Biscay. He looked around the deck. Deserted. The few passengers who had been taking the air when he first emerged, had retreated to the warmth below decks. Good. He preferred to be alone.
The ship that had seemed so huge and solid when he had gazed up at it from the Liverpool quayside, was bobbing about like a cork. The sea was swollen – it had happened so quickly, without warning, changing from millpond into pitching roller-coaster. He set his feet apart and leaned into the motion, giving himself up to the power of the waves and the razor-like slashes of spray on his cheeks. He would have some colour in them after this – unless he succumbed to seasickness. He doubted that would happen; it was too exhilarating, like a wild joy ride. Not rough enough to cause him unease – all those tons of steel looked protection enough against the harshest of seas – but then they’d said that about the Titanic and look what happened to that.
Someone tapped his elbow. It was the cabin steward. ‘You should move below, sir. It’s getting very rough. You’ll be safer below. Nip into the saloon for a nice cuppa and warm yourself up.’
‘Thanks, mate, but I want to stop here a while longer.’
The steward shrugged and stepped away, moving on down the deck, to warn any other crazed thrill seekers. Michael turned his face back into the wind and spray, feeling the shafts of icy, cold, salt water sear his face. The wind was so strong that he had to gulp to take in air. He wanted to smoke a cigarette, but it would be futile trying to light it. Bracing, that was the word – no – abrasive was more like it. The salty spray scrubbed the surface off his skin; it was as harsh as the scrubbing his mother used to give his back on a Saturday, when she got the tin bath out and he, his father and Danny took turns to soak away the week’s grime from the mines and the fields, ready for chapel on Sunday.