You are here: Home / Fiction / Zero Balance by Ashley Fontainne 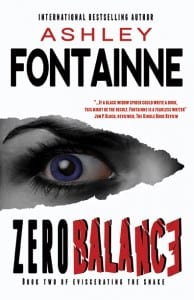 Nine months ago, Audra Tanner stood in front of her colleagues in the boardroom and exposed their hidden secrets. No one was safe from her wrath, and once the smoke cleared, Audra and the others watched as Olin Kemper was led away in handcuffs. Audra’s meticulous execution of plans thrust her into the role of managing partner after her successful coup.

The firm struggles to keep its door open amidst the turmoil and media attention surrounding the shocking arrest and upcoming murder trial of Olin. Audra attempts to deal with the fallout from her explosive revenge and to heal from the intense emotional pain she kept inside for the last five years. As her relationship with Detective Steve Ronson blossoms, Audra begins the task of recovering from the trauma of her rape. Her painful dreams of Olin returning to harm her gone, she finally is able to relax, knowing he is locked away, unable to torment her any longer.

Audra thought her revenge against those that hurt her would set her free. Unfortunately

International bestselling author Ashley Fontainne is an avid reader of mostly the classics. Ashley became a fan of the written word in her youth, starting with the Nancy Drew mystery series. Stories that immerse the reader deep into the human psyche and the monsters that lurk within us are her favorite reads.
Her muse for penning this series was The Count of Monte Cristo by Alexandre Dumas. The revenge on all those who hurt and betrayed Edmond Dantes and the incredible rollercoaster ride his journey takes you on intrigued her. Ashley’s love for this book is what sparked her desire to write her debut novel, Accountable to None, the first book in the trilogy, Eviscerating the Snake. With a modern setting to the tale, Ashley delves into just what lengths a person is willing to go when they seek personal justice for heinous acts perpetrated upon them. The second novel in the series, Zero Balance focuses on the cost and reciprocal cycle that obtaining revenge has on the seeker. For once the cycle starts, where does it end? How far will the tendrils of revenge expand? Adjusting Journal Entries answered that question: far and wide.

Born and raised in California, Ashley now calls Arkansas home with her husband and four children. She also enjoys writing poetry and short stories and recently published Ramblings of a Mad Southern Woman: A Collection of Short Stories and Poetry on Life, Love, Loss and Longing, which is available on Amazon. Ashley is also a supporter of the Joyful Heart Foundation that assists victims of violent crime seek help and find healing, and donates 10% of all book sales yearly to the cause.