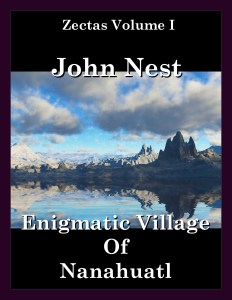 At eighteen years old, Nash Smoak maintains three jobs. At dawn, he works as an assistant to the cook in a small diner. For his full nine hour job, he is shadily hired as a construction worker at an underconstruction skyrise. In the evening, he works as an attendant at a game arcade.

Nash needs to take on those jobs in order to support his two brothers and sickly Grandma. Ever since the tragic accident of his parent’s death. He took it upon himself to support his family.

After being worked to the bone, His manager in the game arcade decided to help him out by giving him a game pod to the #1 VRMMORGP (Virtual Reality Massive Multi-player Online Role Playing Game).

Nash finally found his sacred place, his paradise of relief, the intricate world of Zectas. He has never played a VRMMORPG before, but he took to it like a fish would take to water.

Zectas was a place that was only limited by his imagination. Nash had fallen in love with this virtual reality world completely. All the knowledge that he had learned in real life were easily applicable in this world.

However, this utopian feeling could not last forever. His only sanctuary was destroyed when a group of high level players tricked him and used him as bait in one of their quests.

Nash was left behind while his swindlers escaped to safety. He was captured by the monster. The game had a rule that if a monster is attacking, you can’t log out. For the next couple of hours, he was forced to endure the tortures of the sadistic, fabled Monster!

The sensations that he felt from the game were surreal. Little did they know that this traumatic incident would bring about the birth of Zecta’s most legendary player Smoke!

What Inspired You to Write Your Book?
I originally started translating Korean light novels. After my first chapter of translation, I was inspired to write my own story and that’s how Zectas came to be.

If you like fantasy and VRMMORPG then this book is for you.

How Did You Come up With Your Characters?
Most of my characters are inspired by my three sons. Some of the creatures in the world of Zectas comes from their imaginations and the stories they tell me from what they learned in school.

For the real people playing the VRMMORPG, I base them on past life experiences some of my own while others from my family and friends.

Book Sample
Nash also found out about jobs, races, alignments. There are so many choices that he wondered how long it would’ve taken to create such as a complex game like this.

Nash only wanted to find out about the absolute basic things in the game. He wanted to try discovering the many features this rich VRMMORPG has to offer.

After reading about the basics of the game Nash finally decided to step into the pod. He lied down attached the head visor and he closed the pod with excitement.

Nash was enveloped in a bright light. He saw his body from the outside. It was like an out of body experience. He then suddenly heard a voice.

“What is the race that you have chosen?”

Immediately his skin took on a dark purple color. His ears started to sharpen. And his clothing was changed into a ragged shirt and ragged shorts.

“What is your desired user name?”

“I’m sorry but that user name is already taken.”

“Hmm… then how about Smoke then please.”

“The city of Tezca in Thayotl Kingdom (East Kingdom) please.”

“You have been registered as Smoke. Please remember that you can only have one account in ZECTAS”

Smoke then awoke besides a fountain that appears to be the center of a small village. He thought that with all the hype about how the big the world of Zectas is that a city would be bigger than this small hamlet.

An elderly old man took noticed of Smoke and approached him.

“Good day, Young dark elf. It is rare to see some one of your kind in our humble village.”

“Good day to you as well sir. Is this the city of Tezca?”

“No no no. This is the humble village of Nanahuatl. We are but a small mining village. The great city of Tezca lies far east of here. In the Kingdom of Thayotl across the great lake of Orshere. Our village belongs to the Kingdom of Chayotl (West Kingdom). The nearest city would be the city of Coatl.”

“If you’re brave enough to face the forest and the mountains it may take you only 60 days. I know of a safe route that uses the plains and fields towards the city of Coatl. Let me indicate it on your Map. If you travel by foot it would take you around 100 days.”

A forgotten village. It used to be a small coal mining village. Most of its residents left right after the coal mines incidents. This village has a population of 35.

+ For discovering the forgotten village your fame has increased by 500.
+ You can gain more fame by registering this village in any of the main cities.

After receiving the system notification the Village of Nanahuatl was indicated on Smoke’s map. He then found out just how far he is from the city of Coatl. Smoke was glad that at least he had a path to follow to avoid any dangerous monsters.

“Is it safe to travel towards that City of Coatl?”

“Well there are extremely strong monsters inside the forest and on top of the mountains that are really dangerous but if you stay on the route I indicated in your map you should be relatively safe. There are only horned rabbits, armored armadillos and some stray dire foxes on the fields and plains. But I warn you don’t even try taking on a dire fox. Those things are 10x stronger than horned rabbits.”

Smoke then decided to check his equipment in his backpack. All he had inside his backpack was a piece of small meat, 10 loaves of bread, one basic knife.

Smoke then decided to check on his stats.

Smoke expected the basic stats to be 10, he also understood that the magic resistance was from him being a dark elf but he didn’t realize that it would be 50% resistance for black magic. However what was confusing was this incredibly huge Luck stat. As he suspected from a stat named Luck that fortunate events would be happening to the user. He did just gain 500 Fame right at the start of his game but would would you call being spawned at a remote village as a starting point lucky?

Smoke equipped his basic knife raising his attack to 3-6. Well at least with this maybe he could manage to take on those horned rabbits towards Coatl City.

“Thank you for that information sir but I guess I should head for Coatl City.”

Smoke knew that he had to go to Coatl City because it was only in the main cities where you could get a Job Change. He decided to start his journey and went out of the safety of Nanahuatl Village.

As he stepped out of the village he immediately saw the edge of the forest and noticed that there was about 2 kilometers away from the field. There were some cute and cuddly horned rabbits along the field and noticed that they were just passively digging burrows on the vast field.

Smoke took out his knife and tried attacking one horned rabbit. He stood behind its back and tried to stabbed its body. The horned rabbit immediately noticed this and stepped to the side and attacked him with its horn.

Smoke was rattled by the sudden system notifications and the pain that he felt from each attack. It was not the pain of being actually hit by the horn but something like being hit by a pin.

About the Author:
I’ve been an avid reader from all sorts of genres from fantasy, science fiction, mythologies, historical, romance, suspense, thriller, etc… While on my usual quest for stories I stumbled upon a light novel that was really interesting. It was about a dark hero with a lot of twists.

While I was on the chair doing nothing but admiring the lazy afternoon sky, I thought up of Zectas. Something inside told me to give it a try and share it with the world.

Links to Purchase eBooks
Link To Buy Zectas Volume I : Enigmatic Village of Nanahuatl On Amazon