You are here: Home / Non-fiction / You’re Freer Than You Think by Bob Duncan 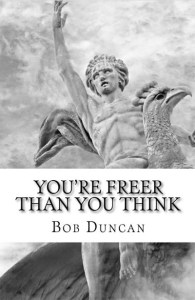 True story of overcoming odds. This short story is an inspiring account of stepping into faith and discovering a dimension otherwise unknown without taking risks. It is meant as a kick start to encourage the reader to investigate possibilities that exist but are rarely accessed because of our hesitancy to risk the unknown. I was desperate enough to try it once and discovered that repeatedly throughout my life each time I had the courage to do the next right thing, astonishing outcomes resulted.

What Inspired You to Write Your Book?
Because I’ve realized that there really are solutions to my so called “insoluble” problems, I wanted to share with others these accounts. It’s become my credo. My hope is that if the reader is in a position where they feel there’s no way out to read the story and consider moving forward anyway. It has been my experience, without fail, that the universe is more supportive than one may believe and that we all have inherent abilities otherwise untapped.

Book Sample
With my bag and a German ten-mark note, I started out for Paris on foot.
At first, I ran as fast as I could to gain distance. I would run, catch my breath, and then run again. Finally, when I felt sure they wouldn’t find me, I slowed to a walk. The more distance I gained, the more intoxicated I became with the rush of being free again. I didn’t care if I had to sleep on the gravel and eat the roots from weeds. I was free!
After walking for hours, I saw some farm workers waiting for a bus; the first new faces I’d seen in months. I sat down to wait with them, still exhilarated by the experience of being out in the world again. Then it occurred to me that I didn’t have the right currency for the bus fare. I showed my German mark and pointed to the pavement but no one responded.
I saw an old man with a donkey making his way toward us. When he got nearer, I approached him too. I walked out to the highway and drew the outline of a bus and flashed my money. He didn’t speak but reached into his pocket and handed me a coin; the exact fare needed for the bus!
I thanked him and he continued to make his way down the road. Something remarkable had just happened. Moments earlier, I didn’t have bus fare. Then, this old man materialized and handed it to me. Coincidence? Maybe.

About the Author:
Bob Duncan was born in Texas, but left at the age of 18 to travel the world. He successfully created new careers for himself along the way, including becoming a business owner in New York, a narrator for documentaries, and the creative director for an advertising company in Los Angeles. His life has had its share of challenges, which he transmuted using the power of vision and persistence. Having lived all over the US and Europe, he’s made turning obstacles into triumphs a way of life, and wants everyone to know it’s possible to live the life they dream of. He has a love of photography that began in early childhood and still brings him joy today. He currently lives in Los Angeles and teaches English to students in his beloved Spain.