You are here: Home / Fiction / Women's Fiction / You Won’t Remember This by Kate Blackwell 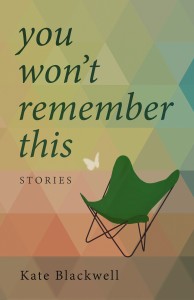 The twelve stories in You Won’t Remember This illuminate the lives of men and women who appear as unremarkable as your next-door-neighbor until their lives explode quietly on the page. Kate Blackwell’s wry, often darkly funny voice describes the repressed underside of a range of middle-class characters living in the South. Blackwell’s focus is elemental—on marriage, birth, death, and the entanglements of love at all ages—but her gift is to shine a light on these universal situations with such lucidity, it is as if one has never seen them before.

What Inspired You to Write Your Book?
Reading has always been my inspiration for writing. Years ago I decided working for a newspaper would be a good way to earn a living, develop my writing skills, and inspire me with real life stories I could turn into the novels and stories I wanted to write. I was wrong. The pay was minimal, the skills of journalism didn’t translate to those needed for fiction, and “real life”—political corruption, polluted rivers, crime reports—wasn’t what made me want to write.

What inspired me were the novels I loved, the stories that made me cry, fictional characters so real I fell in love or wanted to strangle them. Their creators, Willa Cather. Flannery O’Connor, Henry James, Katherine Anne Porter, Alice Adams, were like giants to me, whose magic I could never attain, but I could try.

This book of twelve stories came together over two decades as I struggled to change myself from a journalist to a fiction writer. It took years before I had a story I thought worth publishing. By then I’d learned the crucial difference between reporter and fabulist: the reporter hides herself behind a facade of “truth”; the fiction writer becomes one with her beautiful illusions.

How Did You Come up With Your Characters?
Most of my characters are made up out of whole cloth or as composites of people I know. One exception is the first story in the collection, “My First Wedding.” All the characters were based on people I knew: my mother, an aunt, a cousin, and myself. As fictional characters, however, they were not the real people I knew at the time I wrote about them but the ones I remembered from my childhood, including myself.

The distinction is key. Time and again I have tried to write about something that just happened or someone I am involved with at the time, only to be inundated with useless, distracting details that keep me from finding a story. Unfiltered life, in the moment we experience it, makes muddy fiction. Chekhov said everything he wrote had been filtered through “the sieve of memory,” leaving only the vivid and important.

It surprised me when I realized that six of the twelve stories in this collection begin with a character saying something. These were the first words I wrote as I began each of these stories. (I revise my stories many, many times, hundreds in some cases, but almost never change the first line.) I didn’t really think about it at the time, but I see that a line of dialogue is an efficient way to launch a story and establish a character at the same time.

Unlike some writers I don’t have the gift of inventing a character—what I want her to do and feel—before putting her on the page. I have to have a situation in mind, see her act, hear her speak, before I know who she is. I establish a character in a situation and give her a voice. After that I try to see what she says or does in scenes. Sometimes, not always, I impose on her a past. The promiscuous woman who learned to use sex to avoid being the “perfect daughter.” A childless wife who brings home lonely strays in compensation for having no children of her own. All these situations have consequences, which means there is a story.

Augusta is reading Proust this summer,” my mother said, the way she might have announced that someone we knew was going to the beach or having her house painted. It was a sweltering June afternoon. The two of us were sitting on her screen porch drinking Cokes and eating cherries. “She’s been saving him for her forties,” my mother added. I was twenty-four, about to be married, and I nodded and thought, So this is what one does in middle age.
I had not laid eyes on my cousin Augusta for several years, but I felt a secret bond with her based on the fact, often mentioned in the family, that she had written sonnets when she was young. I, too, had notions of being a writer, not of sonnets but of stories, by which I meant those oblique Joycean epiphanies revered by college English professors at the time. Since she had married and settled in Chappaqua, New York, and had three sons and a wispy little daughter, Augusta had written nothing, so far as anybody knew, but she read everything, sending an endless stream of books down to her aunts and cousins in North Carolina. As for her tackling Le Recherche du Temps Perdu, I must have said something appreciative because I remember my mother replying, “Proust isn’t everybody’s cup of tea,” and taking a sip of Coke.
I was used to these remarks of hers. Augusta and I both fell into the category of persons my mother occasionally referred to as “too smart for their own good,” though I knew she admired Augusta, as we all did, for her vast reading, her intelligence, her looks. She was considered the beauty of the family, whose women were for the most part spare and brown. Augusta was dark-haired, her face strikingly full and white with large black eyes and deeply indented lips that reminded my grandmother of Lyn Fontaine. Her round arms and ample bosom, too ample by family standards when she was a girl, were seen as enhancements as she got older, and my mother and aunt began to refer to her as statuesque.
She was an only child, something my mother liked to pity her for. The household in which she grew up in the tiny tobacco town of Parsons, N.C., included her parents and her father’s two spinster sisters, both of whom were deaf and may have been responsible for the declamatory voice Augusta acquired at an early age. Her father died when Augusta was nine and after that the household consisted entirely of women, all of whom, including the cook, doted on Augusta. Everyone thought she would be glad to get away from all the doting, but when she went off to the Baptist women’s college in Raleigh she became desperately homesick. Her mother, Aunt Mary, kept her letters and for years afterward would read them aloud to guests: Dear Mamsy, this is worse even than Nicholas Nickleby. Oh Mamsy, I never knew real life could be so awful. I would rather be a governess! Everybody always enjoyed these painful literate letters, especially Aunt Mary, who laughed uncontrollably when she read them, though her eyes grew moist.
On my mother’s porch that day I considered making a snappy remark in defense of Augusta, myself, and Proust, but it was boiling hot and I was in a despairing mood, having spent the morning opening wedding gifts and writing down in a little book the names of the gift-givers, to whom I would later write thank-you notes. The thought of the note-writing ahead weighed on me and the presents weighed on me as well. What would I do with all those silver salvers and china egg cups and sets of ceramic coasters? The array of dust collectors piling up on my mother’s diningroom table seemed a dismal portent of my future. Did most brides feel this way? Had my mother?
In the end, all I said was, “I wonder if Augusta still writes.”
“Writes? I shouldn’t think so,” my mother said. “She has her hands full with those children. And Peter isn’t easy. I don’t know how she finds time to read as much as she does.”
Not a good omen. I took a handful of cherries.
“What made you think of Augusta?” I asked my mother.
She gave me a long hard steady look. “I always think of Augusta when there’s a wedding.”
Then she excused herself to go do something in the house, leaving me with the heat and the cherries and my life lying like a brick in my lap.

Buy You Won’t Remember This On Amazon