You are here: Home / Autobiographies, Biographies & Memoirs / Without the Lampshade-How I Learned to Love my Brown Martini by Jack E. Dunning 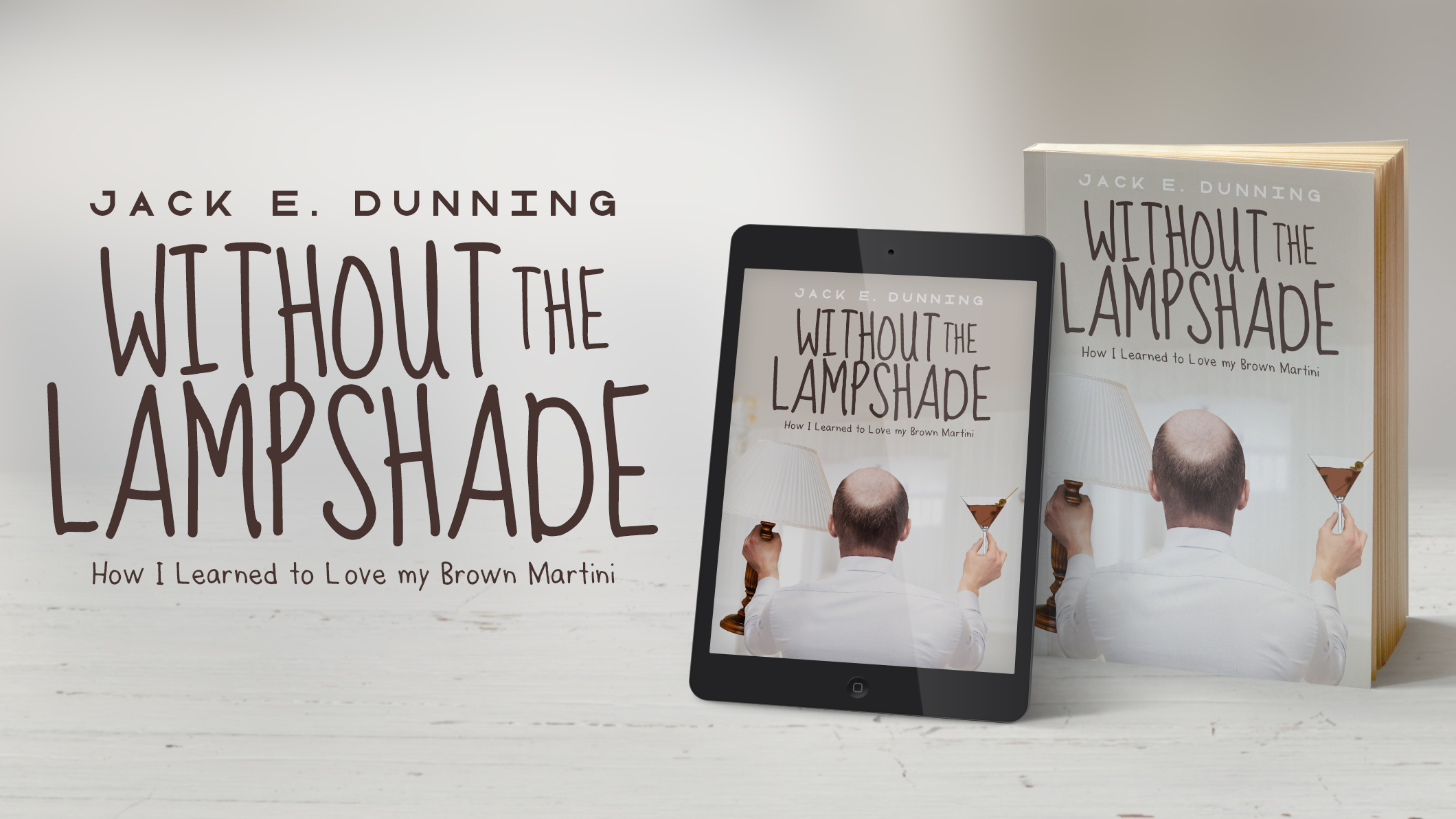 What inspired you to write your memoir?
After 25 years of hard drinking and then stopping cold turkey on a Sunday morning-this also included cigarettes-I looked back at some of the hilarious things that happened to me during the imbibing. After discussing with my wife, also my drinking partner, but in much abbreviated quantities, it was decided that I should document these crazy antics.Thus, was born Without the Lampshade.

I was convinced that I had been called to the Methodist ministry. But then on a hot Sunday morning one of my parishioners was able to get my undivided attention during a sermon with his zany antics of spitting a tobacco wad out the church window. It was a good five feet from his pew and he never missed. I was so fascinated I lost my place in the sermon, deciding right there that the religion business was not for me. This has nothing to do with drinking but does illustrate the natural humor in my life, which escalated measurably during my drinking years.
Did you ever wake up under a chicken coop covered with overnight droppings? I have. Have you ever barbequed yourself on a hot stove? I did. Have you ever come home smashed, ending up the unintended clown for your daughters’ sleepover? I did. Can you turn into Fred Astaire on the dance floor after several drinks? I can. Were you ever so hungover you forgot your own name? I was. Have you ever, in an inebriated state, almost run into a house on wheels in the middle of the street you were driving on? I did. Did you ever turn down a drink that tanked a business? I did.
I once went with my brother-in-law for a haircut, an excuse to go to a bar, and lost him for three days. In Vegas at the 21 table I drank myself into oblivion just because the drinks were free. I almost fell off the roof of the Peabody Hotel, smashed, looking for the famous ducks. Once I spent fifteen minutes behind a parked car after smoking pot and drinking martinis, because I thought the car was turning right. I had a three-martini lunch with Dorothy Parker. I was saved by my daughter from asphyxiation when I passed out in a running car in front of our house.
“Without the Lampshade-How I learned to love my Brown Martini” is my tale of boozing through roughly twenty-five years of my life, performing some hilarious antics that defy belief. In a quarter century I made it my job, a career, if you will, to pursue hard drinking in lieu of becoming the typical working stiff. It was more important to get to the bar for the first drink than work late for advancement. But I was still lucky, mostly finding people and companies that drank as much as I did. I was a happy drunk that has one hell of an adventure to relate.
At the time I traveled eighty percent of the time, on an expense account, and I enjoyed the feeling of living the good life on someone else’s buck. These shenanigans I write about happened coast to coast with my home base a bar in Des Moines, Iowa, much like the Cheers bar on television.
As a “professional” drinker, for several years my life was all about booze, not pursuing a livelihood, not a personal life, just getting bombed or somewhere in between. The intoxication was what I lived for. If not for a caring wife, I would still be doing it. After thirty-five dry years I still do not know why I did it, except I loved, maybe still do, the taste of Scotch, or vodka, or Bourbon, or gin, or beer, or wine, or…

How did you decide how to publish your book and where is it published through:
After dealing with literary agents for several months, and finding out they were only looking for authors with a "platform," I decided to self-publish with CreateSpace and the experience has been more than satisfying..

How do you see writing a Memoir as different from writing other genres of books?
You need a vivid memory of your past which I found was easier than I thought it would be. It has been said often, 'Write about what you know,' and no one knows you better than you. You must pick a particular area of your life that is interesting and a subject that appeals to a wide range of readers. It isn't the typical non-fiction but it sure was a lot of fun.

Author Bio:
From his early years working in television, in its beginning stages when everything was live, Jack Dunning was writing copy for commercials and occasionally a short feature, but there was always that desire to write something bigger. During this period he toyed with the short story but didn’t yet have the expertise to really put words together. His first entry into active writing was doing sales letters, brochures, catalog copy and print media ads in the junk mail industry.
After leaving this business, he started publishing his blog, The Dunning Letter, covering the privacy issued of the day, posting 730 articles over almost five years consisting of over 400,000 words. Then he launched the Nasty Jack blog posting 441articles over approximately three years consisting of some 250,000 words covering all aspects of politics. Since putting both blogs on hiatus, he became serious about writing fiction and completed his first novel, Nymphomania Bloodlust, which he was able to finish in just three months. Since then he has completed and submitted five short stories to various magazines, selling one.
His latest book, WITHOUT THE LAMPSHADE-How I Learned to Love my Brown Martini, is a humorous memoir that covers some of Jack’s wild drinking days. If you are looking for a few hours of laughs (incidents like, after boozing all night waking up under a chicken coop covered with overnight droppings) with a vignette here and there of sheer reality, you’ll want to read this book.