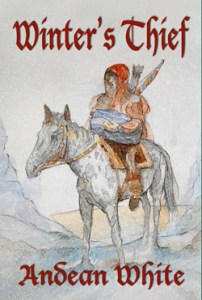 Winter’s Thief is a medieval-like tale of a king’s secret adoption scheme to create an heir to the throne, because the queen cannot bear children. The story takes us into the lives of the characters providing security and those who wish to see the princess dead. Oscar, the captain of the guard, instrumental in the success of the king’s scheme, has second thoughts when his farmer son meets the princess several years later. Their budding romance struggles as they battle treason, spies, revenge, assassination, kidnapping, abduction, ambush, social class, beasts, and parents.

What Inspired You to Write Your Book?
For Winter’s Thief, the idea came from a completely different source than other stories. Kathryn Elizabeth Jones, mentor turned editor, asked if I would write a page and a half story inspired by a card pulled randomly from a deck. The card contained a reproduction of the Bernardo Martorell painting titled Saint George Killing the Dragon—a castle, princess, knight, and a dragon. I was not thrilled with the assignment and put it off until a couple hours before our meeting. With little time to proof, I had to be at my best. It turned out pretty good. Over the next month Kathryn talked me into five pages, ten pages, a couple of chapters, and then a book.
Usually, I get a story idea from a newspaper article, TV newscast, friend’s story telling, or what I might hear waiting to board a plane. Then I will take a few days to draft settings, plot twisting, and characters needed to support the story.

How Did You Come up With Your Characters?
The story needed a physically strong and mentally tough character to be the glue for the others—Oscar was that knight. Oscar’s other character assignment was to be a loving and caring husband and father. Later in the story, the Princess’s boyfriend had to “come from good stock”, logically Oscar’s son. But, the story required the son to need skills (archery, hunting, survival) to keep a job in the market, or he would never have met the princess. All skills were taught by Oscar.
To balance the story, the antagonist has to be just as powerful, or more so, if his revenge scheme was to work.
Listening to the story from the characters point of view, helped decide which characters made the book.

Book Sample
When Althea and Kendrick first meet. He’s a full-grown man but still had boyish elements in his personality. She was in peasant disguise, disgusted with his reaction to her, but intrigued.

Her eyes seemed familiar. The bruise was irresistible. He had to touch it.

“Have we met before? What is your family name?” Kendrick asked as he lightly touched the darkening bruise.

She flinched uncomfortably, “No. We have not met.” The reply was quick. “What are you doing?” Couldn’t he just forget about the bump?

She stood and swayed a couple times placing her hand on the cart’s edge. She rubbed her temple with the other hand.
Kendrick moved to catch her.

Althea was glad Kendrick couldn’t read her mind for she found him immature, egotistical, and a boaster. She would have been happier talking to a frog. But still, something about him intrigued her.

About the Author:
Writing was a relatively new adventure for me. My career path had been manufacturing management until about three years ago when health forced me to retire. A few years previous, I began writing travel journals with a humorous under current—recording observations of cultural differences, language mishaps, and other travels. Several journal readers suggested I try writing. It has become a fun and rewarding occupation.