You are here: Home / Fiction / Fantasy / Windcatcher – Book I of the Stone War Chronicles by A.J. Norfield 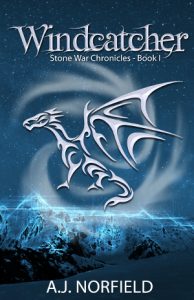 Far away from home, under the command of his brother, Raylan and his squad must retrieve an ancient relic stolen from their kingdom’s trading partner—the Tiankong Empire.

Traveling deep into unknown enemy territory to complete their mission, Raylan learns that the ancient relic holds unexpected life; a creature buried in legends, one not seen in their world for more than two hundred years.

With their enemies closing in, Raylan and his friends search, desperately, for a safe way home. Danger lurks around every corner: Warriors larger than any man, predators stalking them through the night and soldiers determined to hunt them down. Leaving them all little choice, except to keep moving as they plot and fight their way back to those awaiting their return.

What Inspired You to Write Your Book?
This story has been in my mind for years. It was simmering beneath the surface, waiting for the right moment to break through. As I gained experience in life and writing, finally the moment came to me that everything fell into place and I started to put it all on paper. Windcatcher is the first book in a series of five (as it stands now). With major storylines flushed out and the characters emerging from both the story, as well as my mind, I look forward to continue the adventures of Raylan and his friends in the oncoming years.

How Did You Come up With Your Characters?
The inspiration of my characters come from all parts of life. Some represent parts of myself, others what I see happening around me in the world. Other stories, movies, videogames. Inspiration is everywhere to be absorbed and harnessed into your own unique story shape. The dragons (and bond with a human) in particular are based on my experience as a falconer. The interaction with such majestic creatures is at the core of my dragon design.

Buy Windcatcher – Book I of the Stone War Chronicles On Amazon