THE EARTH GIVES WAY TO THE SEA,
THE SEA BOWS BEFORE THE WIND,
THE WIND FEEDS THE FLAME,
THE FLAME BURNS THE WORLD OF MAN DOWN TO THE EARTH.

The sleepy town of White Halls harbors a dangerous secret. On a picturesque street, two houses down from a lovely little park, in a quaint little home with a wraparound porch, lives a family that seems rather normal. Sure, their twenty-year-old son, Xander, still lives at home, but he’s going to college and dating the leader of the schools top sorority. It’s all very… normal. However, when a man is miraculously saved from being hit by a bus, Xander’s life turns in to the living embodiment of the tornadoes he can suddenly create with a flick of his wrist. Whether he wants this gift or not, Xander must learn to use his new ‘super power’ quickly if he wants to survive. For his kind is a dying race, and when this sleepy town has a sudden influx of new, blonde, fire wielders, no one is safe, especially Xander. It doesn’t help that one of these blondes happens to be the most beautiful girl he has ever seen. Xander can’t deny the instant connection he feels to her so, when she tries to kill him, it certainly makes things complicated. 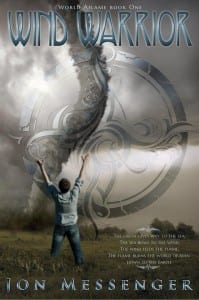 How is Writing In Your Genre Different from Others?
New Adult – which is the genre of the World Aflame Saga – is quite a bit different than the science fiction novels I wrote previously. The series was targeted toward a young/new adult audience, so my normal propensity for graphic military violence had to be toned way down. I also made the conscious decision not to include profanity on my books, so they were approachable by a wider audience. It was difficult to mentally shift between the genres, I won’t lie.

What Advice Would You Give Aspiring Writers?
Enter writing competitions. It doesn’t matter the genre and it doesn’t matter whether you win or lose. Picking a competition forces you to focus on your work instead of pecking away at a story over years (which is what I would do if given the chance). Going outside your genre also forces you to examine different aspects of story creation. What worked in my science fiction books (where I merely had to keep a thin veil of suspended disbelief with the reader) is total different from what works for YA/NA novels (especially those set in modern times). Enter competitions. It will make you a far better writer just for forcing yourself to stretch those mental muscles.

Author Bio:
Jon Messenger (Born 1979 in London, England) serves as an United States Army Major in the Medical Service Corps. Since graduating from the University of Southern California in 2002, writing Science Fiction has remained his passion, a passion that has continued through multiple combat and humanitarian deployments. Jon wrote the “Brink of Distinction” trilogy, of which “Burden of Sisyphus” is the first book, while serving a 16-month deployment in Baghdad, Iraq.

What Inspired You to Write Your Book?
I entered a writing competition on a topic far outside my comfort zone. As a science fiction author, the idea of doing either a Young Adult or New Adult book frightened me. However, the book came together far better than I expected and I won the contest. I was offered a publishing contract through Clean Teen Publishing and began mapping out what has turned into a 9-book series.