You are here: Home / Fiction / Fantasy / Willows of Fate by Suzanna J. Linton 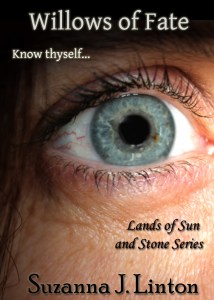 All her life, Desdemona has seen things others haven’t. Dragons, knights, dwarves, kids with three eyes. Heeding her mother’s advice, she keeps silent about this and struggles through life, pretending everything is normal. The break comes when her father’s disappearance drives her into a life of sex and alcoholism. Eventually, she struggles free. She begins to build a life for herself and learns how to ignore the “phantoms”.

At her mother’s death, Desdemona returns to a home haunted with memories but she is determined to not be shaken from what little normalcy she has. However, when her brother is murdered and she uncovers a family secret, Desdemona realizes that she may not insane after all. What she sees may actually be real. And what she sees has begun to tell her to go with them to their world, that she is in danger, and that she has something others would kill for.

What Inspired You to Write Your Book?
I think what inspired me to write WILLOWS OF FATE was the idea of people seeing glimpses into another world. When I was a teenager, I daydreamed a lot and one day, the thought popped into my head, “What if the stuff I see in my daydreams were real? What then?” And it just evolved from there. I thought about this book for years before I actually wrote it.

How Did You Come up With Your Characters?
I know I’m about ready to write a book when a new voice is born in my mind. Desdemona’s voice was the first to come into my mind and she came out of the darker, sadder part of me. The part of me that is a bit reclusive and pigheaded. As for the rest? I have no idea. They just showed up on the page.

About the Author:
Suzanna Linton has lived in South Carolina for the majority of her life. In fact the town where she spent most of her growing up years, Holly Hill, is the inspiration of the fictitious Hammondville, Desdemona’s hometown in WILLOWS OF FATE.

In 2002, Suzanna had the opportunity to attend the summer program of the SC Governor’s School for the Arts and Humanities, where she began to really hone her craft. That experience cemented her love of writing and she went on to Francis Marion University, where she majored in Professional Writing. After graduating, she remained in Florence and eventually began working at the local library, where she met her now husband. Eventually, she quit her job at the library to pursue writing full time.

When she isn’t writing (or procrastinating), Suzanna enjoys working in her rose garden, reading, doing crotchet, and spoiling her nieces and nephew. She volunteers for several charitable works and loves to help those in need. All three of her pets are rescues and she’s been known to swing a U-turn if she sees a dog wandering down the road. Suzanna would probably bring a hellhound home if she could catch it.