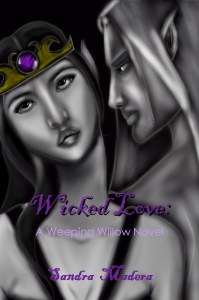 Now that Nalin has returned to the Realm of Magic, the Elves hope that the end of the war is near, and the Ljósálfar can finally defeat the Dökkálfar after driving them underground.

However, it becomes clear that Nalin is not himself, and he knows it. He can’t remember a large portion of his life, and his parents have been killed. Everyone around him is just as oblivious to the time that has been robbed from them. Everyone except for the one that calls himself Avery. Nalin senses dark magic is at work when Avery talks of a raven-haired Elfling that traveled to the Realm of Disorder to save him from the clutches of the Dark King, a girl that has not returned. The same girl that cries out to him from his dreams.

Nalin knows better than to trust his Dökkálfar enemy, but something tells him this Elfling is not an ordinary girl. He is determined to find the one called Willow and set time right.

What Inspired You to Write Your Book?
I decided to write something different than my usual genre. I was really interested in fantasy after seeing the Hellboy sequel. I was really taken with the character of Prince Nuada and his fighting style. I thought that I could write something like that, but I had never written fantasy before.

So, I wrote free short stories in an effort to test myself and gauge a possible audience, creating my own warrior Elf. From the stories, people began leaving great reviews and writing me emails, wanting a continuation of the story. So, I began to write the follow up novels. The novels drew upon the sins of the stories and created a journey towards change and retribution.

How Did You Come up With Your Characters?
Nalin was inspired by Prince Nuada in Hellboy 2. I wanted to create my own warrior Elf with a similar artistic fighting style. Nalin is kind and sensitive to Willow’s needs, but on the flip-side, he is a victim to his bloodlust.

Willow, his soul mate, was inspired by my niece in her look, but her personality is all me. She is young and innocent but grows into a warrior in her own right.

Book Sample
As the cold overtook me, I relied on my connection with Nalin, and I spoke as if he could hear me… as if it were the last time.

My vision blurred over. “I love you more… than I have ever loved anyone… in my life,” I whispered, gasping for air as my lungs began to freeze. “I can’t imagine dying. I am so… scared. Most of all… I am scared to be without you forever. Find me, Nalin. Find me in eternity.”

Links to Purchase Audiobook
Buy Wicked Love: A Weeping Willow Novel Audiobook
Listen to a sample of this audiobook

Is this book in Kindle Unlimited? I’m not sure