You are here: Home / Non-fiction / WHY DO THEY LEAVE CHRISTIANITY AND COME TO ISLAM? by aicha 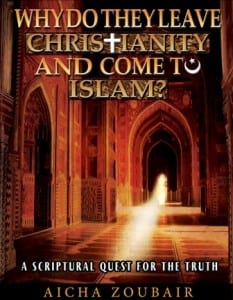 If you have ever wondered how Islam and Christianity are similar and different, be ready to learn some of the most interesting facts in this well written and well researched book. Allow Aicha Zoubair to take you by the hand to teach you how Islam in its many pure forms is becoming more and more popular in the Western part of the world. With many leaving Christianity behind, you might wonder what Islam has to offer what Christianity does not… Did Jesus really die while being crucified, as he was a submitter to God’s will? Not only does the author’s new book answer these questions, it is also objective research into the Muslim and Christian scriptures, to understand why Jesus was sent for and what his message was… If you are ready to learn why Islam is the religion of truth that God wants us to follow, or if you are currently interested in learning how Islam is different from what you learn and see on television, the author’s new book is a must to read. You will not be disappointed, as you will learn a lot, and maybe even see an opportunity to further enhance your spiritual life!

What Advice Would You Give Aspiring Writers?
Work hard to write your book and work hard to promote it, but don’t give up on your dreams.

Author Bio:
Aicha Zoubair is a freelance writer who has self published her first book: “WHY DO THEY LEAVE CHRISTIANITY AND COME TO ISLAM? A scriptural quest for the truth.”
She is a practising Muslim passionate about religion.
Despite the fact that she has no credentials or religious degree to boast about, she embarks on an extensive research of the Christian and Muslim scriptures in order to convey the message of Islam and explain why the so many conversion from Christians.
Years ago, freelance writer and independent researcher Aicha Zoubair casually observed a trend in religion. A practicing Muslim, she noticed a large number of individuals converting from Christianity to Islam. Fascinated by this personal examination, she decided to pursue the truth in this movement for herself. With no advanced religious degrees or credentials, Zoubair took it on herself to research the religion that is affected by this transition.

Zoubair’s research examined both Christian and Muslim texts and traditions and found why so many Christians find a new understanding of God in Islam. Her findings lead her to write the book “Why Do They Leave Christianity and Come to Islam? A Scriptural Quest for the Truth.” With extensive personal insight complementing her systemic research of the two religions, this recently released book is already leaving quite the impression, as yet another piece of the truth.

What Inspired You to Write Your Book?
I love reading about religious knowledge and I wanted to pass the message of Islam to those interested in their life and their relationship with God.