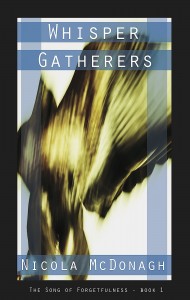 NotSoGreatBritAlbion is a land ravaged by famine and disease. Animal life is all but extinct and people are scattered, living in dread of the evil Agros that rule what is left of the human race – except for those who inhabit Cityplace. Here, in this sterile metropolis lives a unique girl with a special power. She is Adara – catcher of birds

I’m Adara. I’ve got six fingers on each hand, and a secret I cannot share.
There is a rustling in the wind.
Lights beyond the boundary fence.
A sign of Agro threat.
A murmur haunts Cityplace.
Something is coming.

When Agros cut food supplies and the special children start to go missing, hunger brings starving outcasts from the Wilderness to the gates of Adara’s quiet world. So begins the fight to save her home and family from a savage and terrifying force.

What Inspired You to Write Your Book?
This book and the other two books in ‘The Song of Forgetfulness’ series, were inspired by students that attended my creative writing course in my local High School.
They asked me to write a book that incorporated themes that they were intersted in. They also wanted a female protagonist who ate, went to the toilet, was feisty and not too pretty.
It was their enthusiasm for the project that made me want to write the book.

How Did You Come up With Your Characters?
I based the main character, Adara, on two students that attended my creative writing class. I took aspects of their personality and incorporated them into hers. For all the other characters, I researched the meanings of old Celtic names, as it is set in a future Scotland. When I saw a name I liked, I looked at the meaning behind it and gave the character those attributes. For example, Adara, means Catcher of Birds. This meant that I had to use this in some way. So, Adara has a special power that no one else has.

Book Sample
Although nervous and height-stricken, I looked below and called to Drysi and Hrypa, “Oy, tug on the end of the rope so that I can slip-slide down before the Longarms get a whiff of wrong doing.” The over washed sissy-necked juves fled, and I was left to hide as best I could before the Cityguards came searching for Curfewcrashers. Always get more folk risking being nabbed when something oddly occurs. The under-breath murmurs about the Carnieval, and the kiddies that disappeared, had residents all skittish and in need of info that was not forthcoming.

Last time these flesh gobblers and their notsofunfair came to these parts, the mayor had to call in the S.A.N.T.S. to bumsrush them out before they hoodwinked us and filched all the grain. Some say they use it to lure the birdybirds so they can suck out their eyes and brains. I shuddered at the notion and sidestepped my way behind the vidscreen into almost darkness. I put my hand on a cross section support strut, and felt something gunky. I lifted my fingers to my face. It took a while for my eyes to become accustomed to the gloom, but they did. What was stuck there made my hold my breath and glance along the metal pole.

They’d been here. Birdles. The white and grey plops spattered along the beam proved it. Not that I’m an expert or anything, but the size and shape of said bowel squirts would indicate a sphincter no bigger than a newbies fingernail. No hominid I knew had a backside that small. Besides I found it hard to believe that any Citydweller would climb the central vidscreen to do a dump.