You are here: Home / Fiction / Mystery/Suspense / Where The Broken Lie by Derek Rempfer 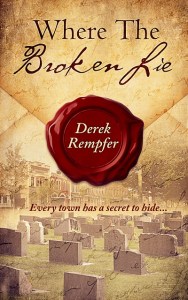 When Tucker returns to his hometown of Willow Grove to grieve the death of his infant son, memories of the murder of Katie, his childhood sweetheart, are ignited. In spite of her death being blamed on a mentally challenged drifter known as Slim Jim, Tucker wonders if the real killer is still out there. With new clues arriving through anonymous letters left at the graveyard, Tucker is certain that Katie’s death is truly unsolved. While coming to terms with the loss of his son, Tucker also seeks truth. But the real killer may be out there, willing to kill again to protect a dark secret.

Where The Broken Lie shines a spotlight on small-town secrets, faith, fear, love and loss in this enigmatic journey into the scarred hearts left behind.

What Inspired You to Write Your Book?
I always knew I was going to be a writer, I was just never quite sure what I was going to write about. For as long I can remember I’d write down story ideas, outlines, scenes and snippets, even poetry, but I never really committed to producing anything.
Then in March of 1998 we suffered a family tragedy and one of the ways I dealt with my grief was to write. I wrote more than I ever had and eventually began to actually commit to spending time writing rather than wait for my muse. The story began to take shape and ultimately I committed to writing the novel. The main character (Tucker Gaines) becomes involved in solving a murder mystery from his past as a way of dealing with his own grief. So Tucker and I both had to channel our grieving process into something else that made us feel…helpful in some way, I guess.

How Did You Come up With Your Characters?
Like most writers do, I drew upon my own experiences and people I’ve known over the years. The story is set in a small town in the Midwest that is quite comparable to the town I grew up in.

Book Sample
Sometimes lost is just a word. Other times it’s life changing. It’s the sharp edge of forever.
“KA-TIE! KA-TIE! KA-TIE COOO-PERRR!”
“What about the park – has anybody checked at the park?”
“Yes, they checked the park. She’s not there.”
“What about Ike’s? Anybody look up there?”
“Ike’s closed two hours ago.”
“Well maybe she got locked inside somehow. Somebody should go check.”
At some point, I fell asleep on the living room couch, which was where I was when Mom nudged me awake in the early darkness of the next morning. She didn’t speak. She didn’t have to. A mother can tell her child a lot of things with just a look.
And my mother’s look told me that Katie Cooper was dead.

There were things inside me once that are gone forever now, replaced by something harder. It started that day. Katie Cooper’s death was the day I started to die, and Ethan’s death is what finished me off.
I walk into the room where my only son lies in an open casket. It is the second hardest thing I will ever have to do.
Tammy couldn’t bring herself to see him like this, so I come here on my own, which I actually prefer. I can be selfish with my pain. Wrap myself up in it without having to be strong for anyone else. It will be our final moment as father and son.
I have never hyperventilated before, but this must be what it feels like. My chest heaves, my stomach swells, and I can’t catch my breath. Swallowed screams cut my throat.
I edge toward him.
Ethan’s face is as bruised and battered as it had been at the hospital two nights earlier. He will never heal. There is nothing for me to do but say goodbye. I stand over him and cry. My tears fall onto his face and I rub them into his skin so that a part of me is buried within him.
I kiss him one last time and stroke his hair. I tell him I love him. And then I turn and walk out of that room where my only son lies in an open casket. It’s the hardest thing I will ever have to do.
I will never heal—old Tucker is every bit as dead as his son.
Who the hell am I now?
The answer to that question, perhaps, can be found in Willow Grove.

About the Author:
Derek Rempfer’s short stories have appeared in The Rockford Review, The Foliate Oak, Underground Voices, and Necrotic Tissue. Where The Broken Lie is his first novel.
Derek’s passions include:
His beautiful, intelligent, funny, kind, compassionate, supportive, loving wife (yeah, I don’t get it either)
His amazing and talented children (all 3 of them!)
Reading (but he sure gets sleepy these days)
Writing (but always has 1001 reasons why he can’t right now)
Sports (plays less than ever, watches as much as ever, coaches when he can)
Making bulleted lists (narrative is hard)
Referring to himself in the 3rd person (Derek thinks this is funny)
Perhaps more than anything else, Derek loves to connect with people. Not email/text/social media connections, but “yeah, that’s exactly how it felt” and “wow, you understand me” connections. His greatest hope is that he accomplishes this through his writing.
Yes, that’s pretty much Derek Rempfer.