You are here: Home / Fiction / Action & Adventure / Where Power Resides by Michael Cody 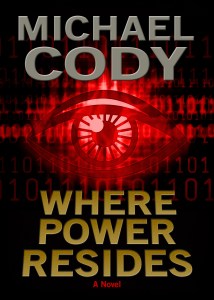 Far Sight is the ultimate surveillance, spy tool. The very best the CIA or NSA agencies ever came up with. What would they do to put a program that spies on American citizens into place? How far would they go? And what else can Far Sight do? Some say it can kill… Spies working their trade against American citizens!
After a brutal and public murder of a nationally known and syndicated writer working for the Washington Post, two FBI agents find themselves in a national political tug of war between the powers in office and the powers in actual control. Fast paced with political undertones “Where Power Resides” will make you wonder who is really running the country! How far will they go to bring American citizens in line and keep them under control? Find out in this fast paced, action packed, roller coaster of a read!

What Inspired You to Write Your Book?
I have been a huge fan of action/thriller writing for quite some time. Tom Clancy, the Jack Reacher books and now, living in Washington, D.C. made it seem like a natural for me. I love a good page turner so I wrote a book I myself would like to read and hopefully others will too.

How Did You Come up With Your Characters?
Some of the books characters were simply necessary to tell the story. Two FBI agents, a loose cannon CIA guy and an old school CIA agent turned good guy all came together rather naturally. Others where constructed as needed to tell the story.

Book Sample
Darren Weis tugged his gloves and pulled his hat tighter to his head one last time as he closed the door to his apartment and started down the steps to the sidewalk. It was late fall in DC and the weather was already way past frigid.
“Gonna be a cold one,” he mumbled as he maneuvered his two hundred forty-five pound, five-foot-ten frame down the old stone steps.
Weis had been a writer for the Washington Post for over twelve years. The last seven years, he’d been penning a political and social opinion column. Syndicated to over two thousand national newspapers all over the country, he had a large and loyal daily readership.
As he reached the sidewalk, he reached to lift the collar of his overcoat in a meager, mostly futile attempt to warm the sides of his face. His eyes tearing from the chilling onslaught, he shivered and moved on. The DC winds could be like a million tiny, razor blades this time of year bringing bone-numbing pain to any exposed flesh.
Turning left, he walked past Mrs. Martin’s small, fastidiously tidy home. An elderly woman widowed now for close to a dozen years, Mrs. Martin was still on the same schedule she had been when her husband was alive. Each day she would rise early to prepare to much breakfast and coffee for herself and a husband that was no longer there. The light in her kitchen window gave away that she was already up. If she happened to notice him passing by she would always give a small wave and a smile.
Moving along quickly, his chin tucked further into his coat for warmth, Weis trudged towards the metro station which was four blocks away from his apartment. Even though he didn’t always enjoy these walks, especially in winter, by the time he got to his office, he was wide awake and ready to get to work. He also found that his morning walk time helped him focus on whatever he was working on at the paper that day.
Two blocks down, Weis turned to enter Joe’s Joe. A small neighborhood coffee house, Joe’s Joe or JJ’s as most of the regulars called it, had been around long before the Starbucks and all those other guys took over every corner of the city.
It had been years since Weis had actually ordered here, instead, he usually came in, grabbed a paper and went right to his favorite seat by the windows. Within about three minutes, as always, an arm reached over his shoulder with a steaming cup of fresh coffee. Two creams, nothing else.
“Thanks Sue,” he would say over his shoulder.
Weis loved the place and could be found here mornings at least five days a week.
Lifting the paper cup to his lips and blowing across the rim, he looked out the window to see a youngish woman standing on the sidewalk staring at him. It was one of those, “Is she looking at me?” moments. For a second, she continued to blankly stare, then she grinned, gave a small wave, and turned to walk on down the sidewalk. Hesitating a second, Weis had no idea who she was. He blew across the cup, took a sip, wondering, should I know her? No. But then again, his picture was in the Washington Post every day. She was probably just a reader who recognized him.
Not giving it another thought, Weis scanned the newspaper. He liked to have an idea of what was going on in the world before he got to work. He was also in the habit of listening to NPR every morning in his kitchen as he ate his breakfast and got dressed.
Politics, he hated politics! Yet, He lived in DC and wrote a column on politics and social issues!
Oh, how ironic life can be! He thought.
In office for almost two years now, President Thompson Henry Fields, Rich family, Ivy League education, silver spoon boy. Weis hated the guy.
The upside, Weis mused, is that with Fields in office, at least I can count on having plenty to write about for the next two years.
Scanning through the rest of the paper, making a few mental notes, he folded it and set it on the counter for the next guy. Pulling a five from his pocket he plopped it under his now almost empty cup and rose to leave.
Glancing toward the counter as he walked to the door, he waved goodbye to Susan and Joe. Yeah, Weis chuckled to himself, and not for the first time, his name really is Joe.

The wind was still gusting a bit as he began the two-block walk to the Metro subway station. Tucking his chin into his coat again and raising the collar, his vision was a bit obstructed when he almost ran into someone standing on the sidewalk.
“Oh, pardon me, Do I…” he realized it was the same woman he had locked eyes with through the coffee shop window.
Smiling broadly she asked, “Mr. Weis?”
“Yes, I’m sorry, do I know yo…”
On hearing him say yes, the woman’s right hand raised to waist level. She was holding a .45 caliber revolver.
Five shots ripped into Weis. The first shot entered at stomach level, with each successive shot moving slightly higher as the recoil forced the weapon’s barrel higher and higher with the final shot plunging into the area just under his throat. From almost point blank range, the slugs that entered Weis’s body were designed to flatten on impact to do the most damage possible. This, combined with Weis not being exactly a small guy, kept the first four rounds from leaving his body. Just as they were designed too do, the slugs bounced around inside him, turning his guts to pulp. The last bullet however entered at his neck and had too little flesh to stop it or even damage it much. It exited out the back of his throat and ended up three inches deep in a tree a half block away.
Still smiling, the woman raised the gun under her own chin and pulled the trigger one last time. The blood and brain matter from this last shot covered a young couple who had been walking up behind her.
The young woman of the couple, looked down to see the chunks of brain, bone and blood covering the front of her coat began screaming. Her companion, in shock just stood speechlessly staring at his gore-covered gloves and coat.
The whole event from “good morning” to the woman screaming took about four-seconds.
Across the street a dark colored SUV with blacked out windows pulled away from the curb and slowly drove away.

About the Author:
Mr. Cody, now residing in Washington, D.C. was born in Asheville, N.C. and raised in the small town of Macon, Ga.
Music and reading became a passion early in life and led to a lifetime affair with Jazz, Classical, R&B, Funk music and thousands of books.
Writer, musician, Urban cyclist, car-free enthusiast and foodie.
Where Power Resides, the first in a series of action/thriller novels explores the question of who really is in power, who pulls the strings in Washington and the Pentagon. Would our own government really spy on US citizens? Find out in this fast paced roller coaster read!
His first book, The Urban Bike, is a personal journey into the joys and challenges of a car-free lifestyle. Filled with tons of advice and wonderful caricature drawings, the book is a fun read even if you don’t own a bike! The follow up, Urban Bike Stories is a collection of real life people telling their own car-free stories.