You are here: Home / Non-fiction / We Were Soldiers Too by Bob Kern 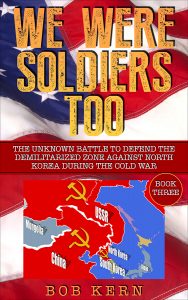 Just Released! Book 3 of the Historical Documentary Series on the Cold War. (Military History) Order Now!
The Demilitarized Zone (DMZ) separates North and South Korea and is the most defended border in the world
Both sides have dug their heels in and fortified the DMZ with defensive positions, mines and booby traps, missiles, and soldiers as they remain vigilant for the recommencement of a war that never ended.

˃˃˃ READ ABOUT THE DANGEROUS JOB OF OUR SOLDIERS IN KOREA ON THE DMZ!
The soldiers were responsible for enforcing the armistice agreement that ended the Korean War. The North Koreans violated it almost daily sending spies, marauders, hit squads, and ambush patrols into the southern controlled portion of the DMZ in their never-ending effort to destabilize South Korea and cause its collapse. Their blatant violations of the agreement has left a bloody trail of dead bodies that includes many American soldiers. This book takes the reader on a journey through the history of the Cold War and the defense of the DMZ from the perspective of nine American veterans, and eleven tours, who served in different capacities in South Korea from 1962 through 1991.

What Inspired You to Write Your Book?
The gratitude received from veterans after publishing my autobiography was so overwhelming I felt driven to expand upon it. I planned a sequel and using the careers of others to tell more history of the Cold War. The response was so overwhelming this has turned into a book series with ten books planned for it. This has become a project of passion for me.

Buy We Were Soldiers Too On Amazon