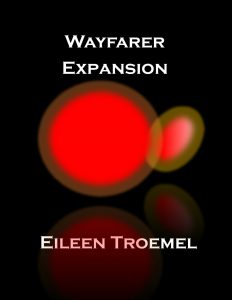 Families grow as the crew of the Phoenix deals with hostages, encounters with new races, and settlers. Five months pregnant, Adara keeps working as a pilot, negotiator and as Mathair Naclan. Decker works to adjust to her new needs and limitations. The Phoenix is on the front line for tackling the Hettian threat as well as transporting settlers to their new planet.

What Inspired You to Write Your Book?
I love addressing women’s issues in my books. In this one, I tackle the issue of how do women keep working while being pregnant. I keep Decker and Adara very busy in this book with trying to find a balance of protectiveness and freedom. They fall back into old habits but find their way through the situation.

How Did You Come up With Your Characters?
How does an active vibrant woman slow down her pace when she becomes pregnant? In this book, I have Adara trying to figure out her limits. Decker has to figure out how much he has to help her limit her activities without stepping over a line of being domineering. It’s a fine line.

Book Sample
“You stay behind this barricade,” Franklin said. “We’ve even got a chair for you to sit in.”
“Good,” Adara said. “How am I going to talk to her?”
“We’re going to use the com,” Franklin said.
“I’ve got you direct wired into the storage room,” Rhia said. “We’re using the com in there which has a microphone. You activate your com and you can start talking to her.”
“Do we know if she went by a nickname,” Adara asked.
“No idea,” Lena said. “It was always Carbonell for me. I never heard any of her squad mates call her anything different.”
Nodding, Adara took a deep breath and cleared her mind. She sat, curled a leg under her and hoped she could do this. “Private Carbonell, this is Lieutenant Commander Adara Stone,” Adara said. “I’d like to talk to you.”
On the screen, Carbonell’s head snapped up, she looked around to see where the voice came from.
“I’m on the com privately to you,” Adara said. “I want to talk. Will you talk to me?”
“What do you want,” Carbonell snapped out. Her voice low and thick.
“I want to help you,” Adara said. “I want to resolve our current situation.”
“There’s no way out,” Carbonell said. “I can’t let her go. He’ll find her and hurt her.”
“Private Amato? You can’t let Private Amato go,” Adara asked.
“Yeah,” Carbonell said. “He’s going to hurt her.”
“Can you let Private Weis go,” Adara asked.
“He’s unconscious,” Carbonell said.
“Does he need medical,” Adara asked.
“I didn’t mean to hurt him but he wouldn’t leave her side,” Carbonell said. “I had to protect her.”
“Because you couldn’t protect your sister,” Adara asked.
“What do you know about my sister,” Carbonell growled at her.
“I know she suffered and died,” Adara said. “The man who did it is out of prison. Is he the one you’re afraid of?”
“He’s going to find her,” Carbonell said.
“We’ve got a lot of really good people on this ship, private,” Adara said. “We can protect her but you have to let her go so we can get medical to look her over. You don’t want her to be hurt. You want to protect her, right?”
“I gotta,” Carbonell said. “I was supposed to be home and wasn’t. I gotta protect her.”
“Yes,” Adara said. “But you can’t do it alone. Look at my detail. I have a number of people in my protection detail.”
“Yeah but no one will believe me,” Carbonell said.
“Did you see Caulfield,” Adara asked. She kept watching Carbonell on the screen, saw how she jerked at Caulfield’s name.
“He got out,” Carbonell said. She paced away from the com. “They let the son of a bitch out. He beat her so badly we barely recognized her.”
Adara said, “I understand why you want to keep Private Amato safe from him.”
“Yes but I’m tired. I stood guard all night,” Carbonell said.
“You did a good job,” Adara complimented and soothed. “I’m sure you want to do what’s best. Let a couple of our people in. We’ll take them to medical and get them checked out. We’ll get others to help you in standing guard.”
“I can’t,” Carbonell said. “I left her for a night and he got her.”
“We’ll put people on her. She won’t be alone,” Adara said quietly. “She’ll be safe and you can sleep.”
“I… I’m so tired,” Carbonell said.
“I know,” Adara said. “You’ve done an excellent job protecting her. She’s safe and we’ll keep her safe while you rest. Would you like to sleep?”
“Yes,” Carbonell said. “I’m tired.”
“Unlock the door,” Adara said. “You trust your squad. They’re going to be right there at the door. Let them in. They’ll guard Amato for you and you’ll be able to sleep.”
“I don’t know,” Carbonell rubbed the phase pistol against her temple.
“Do you think someone else would be better for keeping her safe,” Adara asked.
“The Chief,” Carbonell said. “She’s a good fighter. I trust her.”
“I’ll have her at the door,” Adara said. “Will you hand over your weapon, Private?”
“Yeah. To the Chief, I trust the Chief. She’ll take care of Amato, keep her safe,” Carbonell muttered.
Lena walked to the door of the storage room. To either side of her fighters braced to storm the room and detain Carbonell. Lena knocked on the door. It slid open to reveal a nervous and sweating Carbonell.
“Private,” Lena said. “I’m here to relieve you of guard duty.”
“You’ll keep her safe, keep him from hurting her,” Carbonell said.
“Yes, now hand over your weapon,” Lena ordered. Carbonell held out the pistol.
“Chief,” Carbonell said. “I screwed up.”
“We’ll figure it out,” Lena said. “Come with me.”
Carbonell stepped out of the storage room. “You gotta restrain me,” she said seeing the fighters. “I know how this works.”
“Are you going to fight,” Lena said.
“No, ma’am,” Carbonell said. “I know I screwed this up. I’m really confused.”
“I see you are,” Lena said. “You’ll go with these men without resistance.”
“Yes, ma’am. I’m sorry, ma’am,” Carbonell said.
Fighters rushed in to check the condition of the two privates taken hostage. Med techs followed once the room was cleared. Paul grinned, “You managed to not get nearly blown up or damaged in any way. You might be improving, LC.”
“I definitely like this better,” Adara said. With a smile she demanded, “Take this damn armor off. It’s heavy.”