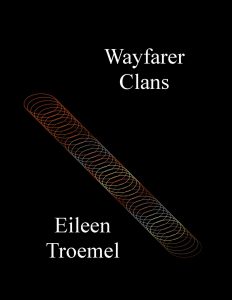 Half human and half Wayfarer, Lieutenant Adara Stone, pilot of the Pritchard, out flies a pilot in a stolen ship with kidnapped scientists. Capturing the ship, Adara confronts the pilot, her oldest brother Nealon. Adara struggles to cope with a family she feels abandoned her. Adara works with Franklin on kidnapping cases which point to a rogue Wayfarer clan committing the crimes.

What Inspired You to Write Your Book?
This is a continuation of the Wayfarer series. Adara and Decker’s story seemed to just be getting started. In the first book, Adara and Decker come together. The next step in most relationships is to get to know the families. I thought about how Adara would feel if her family, her people were suddenly involved in some pretty serious criminal activities. Are the Wayfarers good or evil? It’s about growth and acceptance for Adara and Decker.

How Did You Come up With Your Characters?
Since my main characters were already established, I thought about how family would look. I’m the youngest in a large family so know how different siblings can be. The first three you meet in this book are different. Her brother Nealon is a guy who nurtures. Again, I wanted to play with roles of what is expected. Guys are supposed to be tough and unemotional which Nealon can be but he also loves his family. I wanted to show how men can be strong and loving at the same time. Bedelia is an earth mother. She’s the one who has lots of kids and seems to do better with the more around her. As these are two of Adara’s older siblings, I was able to bring in more of her childhood into the story.

Book Sample
Captain Flannery and Investigator Franklin stood in the corridor waiting for her. Franklin said, “We’ve got the pilot in here. He’s a Wayfarer. Says he’ll only talk to the pilot who out flew him.”
Decker Flannery watched his lover, her blank face hid her emotions. He sensed an anger and a fear in her. She nodded, “I’ll talk to him.”
“Everything all right,” Decker asked putting a hand on her lower back.
“There’s a Wayfarer woman in med bay,” Adara said in way of explanation. “She was taken off a long haul vessel.”
“Someone will take her statement shortly,” Franklin said.
“She won’t cooperate much,” Adara said. “Are you coming in with me?”
“Thought we’d let you go in alone while we watch from observation,” Franklin said. “He’s restrained.”
Adara nodded. Decker said, “If you don’t want to, we can go in with you.”
Adara shook her head, “He’ll talk to me.” Adara waited while they stepped into the observation room.
The door slid open. Adara saw the man at the table. His hands in restraints rested on the table. His long red hair had the same streaks as her own. His eyes matched hers. He looked up, in Wayfarer said, “I knew it was you.”
“What are you doing with kidnappers,” she asked in Standard.
“I’m the victim here,” he said in Standard. “They took my maite saol and son. I had to fly for them.”
She crossed her arms. She knew she was supposed to sit down. She couldn’t. “Tell me what happened?”
“Alainna and I were running a long haul. I work for her family business. We were boarded. They grabbed her and Maddock,” she flinched at the name.
The man paused, “I know…”
“Just continue with what happened,” she cut him off. She didn’t want to hear from him about the other.
He nodded, “They took them. Some of their crew took the ship. I was able to set the alarm so her family would know. They loaded us into a scout ship and brought us to the science ship. They told me I’d fly the research vessel or they’d hurt Alainna and Maddock.”
“What did they hope to gain by taking a research vessel?”
“I don’t know. I was just trying to figure out how to get my family out of this whole mess alive,” he said.
“Do you know them?” she asked.
“No. I’ve been with the Terra clan for five years. I haven’t mixed with humans much,” he said.
She stared into his eyes. His eyes begged her to believe him. She said stiffly, “Alainna is in med bay. She, Maddock, and the baby are fine.”
“Oh, thank the universe,” he said. “I was so afraid. Thank you.”
She looked at the camera and signaled for the two men watching to come in. She waited for them to join her. Decker and Franklin entered the interrogation room. She stood far from Decker, not wanting him to see their auras. “This is Captain Decker Flannery and Investigator Argus Franklin.” She pointed to each man.
Keeping the blank stare on her face, she introduced the man at the table, “This is Nealon Stone, my oldest brother.”
Surprise flitted across both men’s faces. “The Terra clan can confirm your statements,” Franklin asked.
Nealon looked at Adara. He spoke in a bark of Wayfarer. Decker recognized the word Avri.
Adara narrowed her eyes, “Stick with standard, Nealon.”
Nealon scowled at her, “You expect me to submit to their questioning.”
“You were the pilot of a stolen vessel,” Adara asserted coldly.
“Naturally, with me being a Wayfarer I must have stolen it,” Nealon growled at her.
“I didn’t say that,” Adara said.
“You’ve become too Avri, difra beag,” he muttered.
She launched herself at him. He pushed back the chair to stand as he caught her flying body. She punched him hard in the jaw. He grunted, struggling to hold his angry sister at bay. Decker and Franklin jumped forward not knowing who to protect, trying to get between the struggling siblings. Nealon shoved her back. He growled, “Truth hurt?”
“You stopped being teaghlach… family eleven years ago. Don’t claim a relationship now,” she yelled at him forcing herself to step away from him.