You are here: Home / Fiction / Fantasy / Watermark by Joy Liu 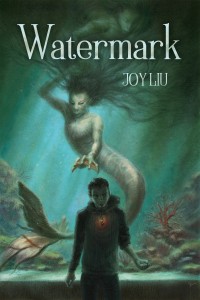 After a traumatic car accident, Luke Rendel returns home from college, trying to escape survivor’s guilt and piece his life together. But when he takes a job as the night guard at the town aquarium, he meets an enigmatic, mermaid-like creature named Urhoa trapped in a tank who claims that his grandfather owed her a debt–and it’s time for Luke to pay. As Luke searches for the pearl, mirror, and comb that will free her, he discovers that their worlds are more intertwined than he could have imagined. He must use what he learns to face monsters of the ocean and his inner demons, and keep his wits about him, for not everything is what it seems.

What Inspired You to Write Your Book?
When I went on a class field trip to a sleepover at the Tampa Aquarium in the 12th grade, I didn’t expect to find inspiration for a novel. But waking up to a scene of pink coral and butterfly fish, I wondered, how can they possibly account for all the fish that are in this tank?…What if there was a creature in the tank that they didn’t know about? I had a vision of a mermaid peeking out from behind the rocks. Nine years later, Watermark is the result.

How Did You Come up With Your Characters?
The characters arrived naturally. Although Luke is the narrator and protagonist, the central conflict, for me, were the characters of Urhoa and Ihle. Urhoa is pensive, and a bit on the conservative side. She wants to abide by the laws, but does reprehensible things in self-interest. Ihle, on the other hand, was always caught between two worlds, and never felt like she belonged to either, so wanted to make a world for herself and the others like her, laws be damned.