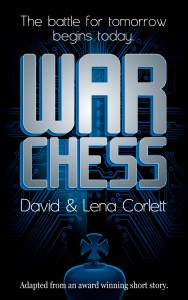 WAR CHESS IS ADAPTED FROM AN AWARD WINNING SHORT STORY!

Two years after moving from Illinois, Chicago to Brentwood, California, 21 year old, Joe Hunter, has settled into a new life, which beckons him with unlimited opportunity, and dreams of a greater future. A third year college student, he has a peculiar fascination for politics and history. Soon, he finds himself enflamed with primal urges of lust and desire, for his sexy next door neighbour, which leads him onto a pathway of falling madly in love.

A scholar by nature, but keen to keep it hidden from his ‘to be seen, and be seen’ friends, Joe soon finds himself deeply intrigued by a history assignment that he knows absolutely nothing about. An anxious desire to do well, he surprisingly finds help from an unlikely source that leads him into the vast electronic boundaries of the World Wide Web. While surfing the net, something unusual happens to the electronic confines of his laptop, where his world–from this point forward–will change forever, and never be the same again!

During this book, Joe is taken through a journey where he is protected and cherished; where the wealth of the world comes in an abundant supply, and leaves in a mad rush of disappointment; where shadows of helplessness, loneliness, dread, deceit and sorrow reside; where the true meaning of responsibility, and adulthood, take on a whole new meaning; where a great light of hope shines in the most unexpected of places; where the game of the Kings, brings on a whole new meaning!

A game of chess, two college students, and a machine of mindless military murder, will soon determine the destiny and fate of the world, and all humanity within. In a fatal contest, of man and machine, the future of all humankind will stand, or fall, upon the decisions of youth and the inexperienced.

WELCOME TO THE MYSTERIOUS WORLD OF WAR CHESS: LET THE GAME BEGIN!

What Inspired You to Write Your Book?
Everyday events inspire us to write and create.

How Did You Come up With Your Characters?
The characters just developed with the storyline.

About the Author:
We are a husband and wife writing team.
We were born and bread in Auckland, New Zealand.
We are first time writers of the epic, “War Chess”, book series.