You are here: Home / Fiction / Walking to Israel by Emma Gates 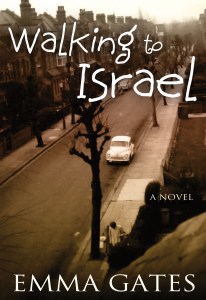 Nine-year-old Lottie feels trapped. Her divorced mother has brought her three children from the U.S. to England, en route to what she believes is their religious destiny in the Holy Land. Her schoolmates think she’s odd. Her twenty-four-year old piano tutor, Rory, says he’s in love with Lottie – but she is as frightened by his insistence on keeping their relationship secret as she is confused by his touches.

Chosen by Kirkus Reviews as one of only 15 indie reviews in its September 2014 magazine: “A troubling but perhaps necessary portrait of abuse handled with grace and sensitivity.”

What Inspired You to Write Your Book?
This is an autobiographical novel in a number of aspects. My mother was bipolar, and believed we should indeed walk to Israel – her ‘Holy Land’ – from the house she found for us in London after divorcing my father in the U.S. She also believed my siblings and I would become a composer, a dancer and a pianist. She educated us in England accordingly. My piano teacher fondled me in ways that left me stimulated and confused. I was a child model as was my brother. However, in the lovely alchemy that is fiction, the elements – setting, characters, current events – of my childhood took on their own life as soon as they were onstage and carried this narrative ‘swimmingly’ as the Brits would say, toward an unexpected conclusion with which I, supposedly ‘the author’ had little to do.

How Did You Come up With Your Characters?
Lottie, Althea, Lars, Nell, and Stevie and Rory came to me fully fledged and ready to shout to the universe. I did need to interview Rory as I wasn’t very keen on him and felt like quitting his story. Rory convinced me of the importance and truth of his narrative. Lottie’s actions toward the end took me completely by surprise. Her strength prevails.

About the Author:
Award-winning writer Emma Gates was born in New York and spent her childhood in England. She earned a BA in Spanish/Latin American Studies from Indiana University Bloomington, and an MBA with concentration in Arabic/Middle Eastern Studies from the Thunderbird School of Global Management in Arizona. She worked for three years in Mexico and five in Saudi Arabia. She’s an international trade and telecoms specialist currently living near Chicago with her family and two inscrutable cats.

“I try to write what I want to read — novels that are dense, ‘chewy’, full of ideas, which transport me to different places while taking me deep into the hearts of characters whose lives immediately engage and move me profoundly. Because I’ve lived many years outside the States, I’m interested in how Americans interact with people from other countries, whether here or there.”