You are here: Home / Autobiographies, Biographies & Memoirs / Waiter to the Rich and Shameless: Confessions of a Five-Star Beverly Hills Server by Paul Hartford 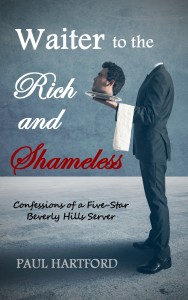 What inspired you to write your memoir?
I wanted to share my experience with those who are unaware of the fact that these elite positions do exist and give hope to those aspiring to reach the the top of their game in food service. Of the many millions of food service workers around the globe, only a tiny number ever ascend to a top-level position at a world-renowned restaurant. On the other hand I hope that the story I tell of my personal evolution will also serve as inspiration to those who are chained to a corporate or 9-5 job and dream about taking a chance on themselves to finally break out and follow their heart’s true passion.

About your Book:
A down-and-out musician chops off his hair to become a server at the top of the Hollywood food chain, discovering a cloistered world of money, fame, bad behavior and intrigue.

Waiter to the Rich and Shameless is not just a peek into the secretive inner workings of a legendary 5-star restaurant; it is not just a celebrity tell-all or a scathing corporate analysis. It is a top-tier waiter’s personal coming-of-age story, an intimate look into the complicated challenges of serving in the country’s most elite, Hollywood-centric dining room while fighting to maintain a sense of self and purpose.

How did you decide how to publish your book and where is it published through:
After trying to get an agent for almost a year by sending out tailored query letters and book proposals, etc., I decided to self publish through my own publishing company. Since then I have spent over 7 months as a #1 Bestseller on Amazon in the Pop-Culture category, and now have an agent who is working hard to help me secure audio, foreign and even major publishing deals.

How do you see writing a Memoir as different from writing other genres of books?
Since I had the truth to draw on it wasn’t as challenging as it can be to write fiction but the truth can be painfully hard to write about as you have to relive it every time you edit or rewrite certain parts. But in another way it can also be very challenging to draw patterns out of real-life events, and to find a “theme” within one’s life to power the story. There’s a saying that fiction is harder than writing about real life because fiction has to make sense (whereas life doesn’t always make sense). However, there does have to be some kind of narrative flow to a memoir, and it does have to make sense!

Author Bio:
In order to become Hollywood’s top Waiter to the Rich and Shameless, Paul “Pauli” Hartford had to abandon his long-haired rocker dude persona and double down on his dedication to five-star servitude. After several turbulent years at the top of his waiting game, Hartford comes clean in this daring confessional, dishing about everything from debauchery to deification at the Beverly Hills hot spot he’s cleverly calling the “Cricket Room” to avoid being sued to hell and back.

As a noted musician and vocalist who has performed in Europe, Asia and America, Hartford has written over 100 songs and has landed musical licensing deals with several feature films and TV shows. Conversely, as a top-tier waiter, Hartford earned a six-figure salary and frequent trips to a therapist.

The “Waiter to the Rich and Shameless” ebook has spent over six months in 2015 on Amazon’s #1 Best Seller list. Hartford is developing a TV pilot based on the book as well as a sequel, “Waiter to the Rich and Shameless 2.” He is also hard at work on his second screenplay. He is also a noted musician and vocalist who has performed in Europe, Asia and America. He has written over 100 songs and has licensing deals with several TV shows. Paul Hartford lives in Los Angeles with his wife in a quaint apartment overlooking the ocean….. of cars on the 405 freeway.