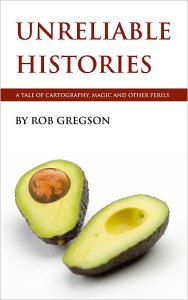 A young cartographer working in a wild frontier land discovers that someone has been interfering with history. More worryingly, the more she investigates, the more it looks like that ‘someone’ might be her…

In her quest to uncover the truth about a life she didn’t know she’d led, Myrah and her not-so-intrepid friends are beset by crazed wizards, venomous demons and, most challengingly of all, some enormously embarrassing relatives. When priests, thieves and reality itself are out to get you, life can get pretty tough – and having a war to stop certainly doesn’t make things any easier.

‘Unreliable Histories’ is a comic fantasy, guaranteed free from lovelorn vampires, arcane prophesies and ancient-but-recently-awoken evils. Some of the important but seldom-posed questions it sets out to answer include:
Who keeps the torches burning in all those long-deserted subterranean lairs?
Why does women’s armour always look so suspiciously like fetish-wear?
And why the sudden obsession with avocados?

What Inspired You to Write Your Book?
A great many of the swords and sorcery worlds I encountered as a kid seemed to be populated by characters who I felt were due a bit of comic scrutiny. There were always hordes of improbably competent adventurers, droves of inscrutable wizards and, behind the scenes somewhere, enormous great bags full of whoever it is who designs all those unnecessarily elaborate underground lairs. I wanted to take a look at a world like that and explore how it might work.

‘Unreliable Histories’ was the result. It’s the first book in a two-part series that takes a look at all sorts of conventions of the fantasy genre. ‘Tongue in cheek’ is a phrase that reviewers tend to use quite a lot.

At this point, I should add that it’s all done very fondly. I always enjoyed fantasy; from Lord of the Rings to Buffy, I’ve been a loyal, card-carrying fan. It’s just that when it actually came to the business of writing it, I couldn’t bring myself to include what now seems to be the expected quota of strangely impenetrable prophesies, werewolves and romantically inclined undead.

That said, whatever it is that I’ve written, it is definitely a fantasy: there are wizards and assassins and there’s even an underground temple for those who enjoy that sort of thing. There are swords and magical artefacts and a few mythical beasts, too. Orcs and goblins are out but (for reasons probably best explored in the privacy of a professional counseling session) dentists, cartographers and avocado farmers are in. There’s a quest, there’s an Ultimate Truth to be found and in the second book there’s even an apocalypse of sorts. Soothsayers and ‘chosen one’ set-ups get a mention, and there’s also the odd aside about the difficulties of town planning in a realm of magic and monsters.

I suppose what I’m saying is that it’s probably not an ideal choice for those who take their swashbuckling very seriously, but I hope it appeals to a small niche of readers who enjoy strangely digressive sagas about cartography, magic and unreality.

How Did You Come up With Your Characters?
I needed a detached observer figure – Myrah – to question some of the assumptions that usually go unchallenged in a fantasy world, and making her a cartographer was a useful way of giving her that detached perspective.

I also needed someone more innocent and accepting of the world – her friend Al – to sustain the various arguments and discussions, and also to help keep everyone alive when things get sharp and pointy.

There’s also a deranged augur who throws in some clues about the mutability of the past but is mainly there for comic purposes. (He has a very distinctive philosophy.)

About the Author:
Rob Gregson spent much of his youth reading fantasy novels, immersing himself in role playing games and generally doing everything possible to avoid life in the real world. In his defence, we’re talking about the late 1980s – a time when ridiculous hair, hateful pop music and soaring unemployment were all very popular – so it wasn’t altogether a bad decision. However, had he abandoned the realms of elves and wizardry at an earlier age, he might have developed one or two useful life skills and he would almost certainly have found it easier to get a girlfriend.

Since that time, he and reality have developed a grudging tolerance of one another, although their relationship still goes through the occasional bad patch and his first two novels – Unreliable Histories and The Endless Land – are evidence of that.

Rob lives in Lancashire (UK) and is married with two children, although he has absolutely no idea why anyone should find that interesting.