You are here: Home / Fiction / Historical / Under the Same Sky by Genevieve Graham 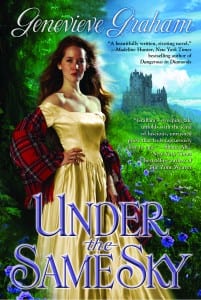 In 1746, a woman from South Carolina and a Scottish Highlander share an intimacy and devotion beyond understanding. They have known each other their entire lives. And yet they have never met…

Maggie Johnson has had “the Sight” since she was a child, dreaming visions of the future and of a presence she knows is real. She calls him Wolf, and has seen him grow from a young boy into a fearsome warrior. And when her life is torn asunder by unspeakable tragedy, he is her only hope.

Andrew MacDonnell is entranced by a beautiful woman who has always dwelt in his dreams. When war ravages his land, he leaves the Scottish Highlands on a perilous journey to the New World to find her…

Their quest to unite across a treacherous wilderness will test the limits of courage and endurance, guided only by their dreams—and by the belief in the true love they share…

What Advice Would You Give Aspiring Writers?
Write for yourself first. If you don’t love what you’re doing, don’t do it.

NEVER publish your work before it’s been edited. You only get one chance to make a good first impression.

Genevieve Graham graduated from the University of Toronto in 1986 with a Bachelor of Music in Performance (playing oboe). While on a ski vacation in Alberta she met a really cute guy in the chairlift line-up and they skied together for two days. After the second day she decided she had to have him … permanently. The couple (now husband & wife) subsequently moved to Calgary and brought two beautiful and talented daughters into the world. They have recently settled in a small, quiet town in Nova Scotia and are loving their new life.

Writing became an essential part of Genevieve’s life a few years ago, when she began to write her debut novel, “Under the Same Sky”. Her second book, “Sound of the Heart” was published by Penguin on May 1, 2012, and the third in the series, “Somewhere to Dream”, will be published in November 2013.

Genevieve also offers editing services on her other website: www.WritingWildly.com

What Inspired You to Write Your Book?
I have read the books of Diana Gabaldon multiple times and every time I learn something new, whether it’s the style of writing or the history of the time period. Every time I read it I am swept away. I decided to try my hand at writing, and after I learned how to properly write—and edit—I was amazed when I became swept away by my own books!